(CNN) -- Up to 50,000 revelers descended on the small Spanish town of Bunol near Valencia Wednesday, collectively throwing, squishing, and pummeling 100 metric tons of over-ripe tomatoes in what has grown to be the world's biggest annual food fight. 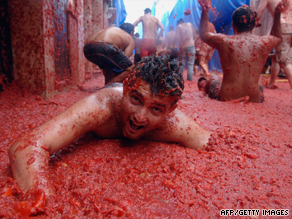 The Tomatina festival began in 1945, but there is no official explanation of how it started.

Theories of its origins range from a practical joke on a bad musician to the anarchic aftermath of a lorry spillage to a local food fight among friends.

Nowadays all the action takes place in the space of one hour on the last Wednesday of every August.

The beginning of the fight is signaled by the firing of water cannons. Then it's every man for himself and the only rule is that tomatoes must be squished in the hand before thrown to avoid excessive injuries.

• 60 million tons of tomatoes are produced each year, making it the world's favorite fruit.
• Americans obtain more of their vitamins from tomatoes than from any other fruit or vegetable.
• There are at least 10,000 varieties of tomatoes
• Tomatoes contain Lycopene, a carotenoid (plant pigment) that protects against cancer.
• The word tomato derives from a word in the Nahuatl language (indigenous to central Mexico), "tomatl"
• When they first appeared in English print in the early seventeenth century, tomatoes were referred to as "love apples."