(CNN) -- A wildfire in Yellowstone National Park has grown to 9,300 acres and closed a section of the main road through the park, but Yellowstone is still open and National Park Service officials said Monday there was no danger to travelers. 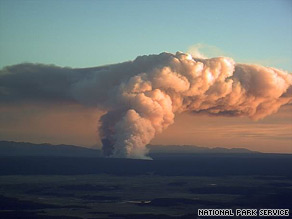 Lightning started the fire on September 13.

Snow could fall this week at Yellowstone, which sprawls across parts of three states, and end the park's fire season, officials said.

National Park Service officials said the lightning-sparked wildfire started on September 13, but wasn't noticed until 10 days later in the Arnica Creek area east of Old Faithful, the geyser that is the park's main attraction. Last week the fire increased in size and by this weekend had charred 6,500 acres.

National Park Service spokeswoman Linda Miller said there was no danger for guests.

"We don't anticipate it affecting any buildings," she said.

Miller said Monday that 90 percent of the fire was in Wyoming, with the remainder in park areas in Idaho and Montana.

Facilities at Yellowstone were open Monday, and Miller said visitors were still welcome.

"But there's going to be smoke," she said. "Where there's smoke, there's fire. The vistas won't be as clear as even just a week ago."

Still, she said, "We don't want to scare people into not coming."

Rick Hoeninghausen, director of sales and marketing for Yellowstone National Park Lodges, said the fire was causing cancellations at the parks. But he said "some tourists already in the park are are just changing their plans and working around it."

He said the fire is more of an inconvenience than a danger.

The Arnica fire has closed Grand Loop Road, the main road through Yellowstone. Visitors wanting to get from one end of the wilderness area to the other will have to take a 280-mile detour.

Yellowstone National Park has nine lodges and about 2,200 hotel rooms. At least two of those facilities close each year after Labor Day.

Hoeninghausen said the fire "may be a little disconcerting for East Coasters not used to wildfires, but travelers and tourists can call the park and check the Web sites for updates on the fires."

A Park Service press release cautioned that "the smokey conditions are affecting air quality in the park."

"People with weakened immune systems and those with heart and lung conditions may have trouble breathing," the press release said.

The National Weather Service in Wyoming predicted snow would fall by Wednesday morning.

Kempton said 230 firefighters, 15 fire engines and five helicopters were helping keep flames away from any historic structures at Yellowstone.

Lightning starts an average of 22 fires every year in Yellowstone, according to the park service. Most of the naturally started fires in the 2.2 million-acre park extinguish on their own.

Yellowstone is a fire-adapted ecosystem, and fire plays a major role in maintaining the health of the area's wildlife and vegetation by clearing old underbrush and allowing for new growth.

All About National Park Service