7 reasons to lose the booze in flight 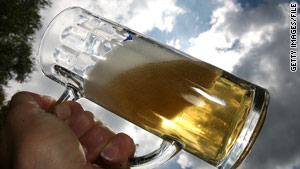 Sandra Langer explains why: On a recent trip from Amsterdam to New York, she watched a good number of her fellow passengers get hammered. "Red-faced men blocked the aisles, puked in the bathroom and groped the females -- along with a laughing crew," says Langer, a writer who lives in New York.

The trip made a lasting impression on Langer. "Never again will I take a connecting flight through Amsterdam," she says.

Stories like hers make you wonder if it's time to limit, or even stop serving alcohol on flights.

Some airlines do. Bahrain's parliament earlier this year voted to ban alcohol on Gulf Air flights. Other carriers have policies that limit the amount of alcohol that can be served to passengers.

Not that current laws are what you would call permissive. Federal law restricts alcoholic beverages from being served on a plane without proper certification. It forbids alcohol from being given to someone who appears to be intoxicated, or is escorting a prisoner or is carrying "a deadly or dangerous weapon."

When I proposed an alcohol ban on flights more than a decade ago the response from readers was a resounding "no". But a lot has changed since then. We've had a series of drunken-passenger incidents, each one of which leaves you questioning why passengers are allowed to drink on a plane at all. (I asked the Federal Aviation Administration if any changes were planned to current alcohol-related rules. None are.)

I've changed, too. Eleven years ago, I would have thought nothing of ordering a glass of wine on a flight. The ban idea? That just made for an interesting story in 1998. But today, as the father of three who doesn't drink much anymore, I can see the wisdom of abstaining for a few hours on the plane -- if not longer.

Here are a few reasons for keeping the cocktails grounded:

Unless you haven't flown in a few years, you probably know that air travel is getting more stressful. Alcohol can make it worse, say experts. "Drinking on planes has unique hazards, particularly as flying becomes more stressful," says Karen Sternheimer, a sociologist who teaches at the University of Southern California. "If there is a long delay on the tarmac the irritation can be magnified by alcohol." At a bare minimum, passengers need to be sober enough to understand and cooperate with crew instructions. "Under increasingly stressful conditions, too much alcohol can make a simple annoyance into a serious problem," she adds.

Anywhere else, you can walk away from an unruly drunk. But not on a plane. "It's a metal tube and blasting off at hundreds of miles per hour," says Jeffrey Lord, a veteran frequent flier based in Burlington, Vermont. (Lord believes alcohol isn't the only problem on a plane. "How about spending hours strapped in with these stressed-out companions with nothing other than caffeinated beverages being served?" he asks. Good point.)

3. Drinks on a plane aren't just intoxicating -- they're toxic

"Higher altitudes do amplify the effect of alcohol, which, as you can imagine, can cause problems for passengers that imbibe too much," says Ashley Halsey, a spokeswoman for American Behavioral, a healthcare organization that specializes in drug and alcohol abuse and treatment for employers. "Because alcohol impairs judgment, the likelihood of violent or other anti-social behavior is increased. When people fly, they also get dehydrated, and alcoholics tend to drink alcohol instead of water, which tends to increase their adverse reaction."

Just listen to Terry Ward's account of her last flight from Orlando to Newark. "I sat next to a group of guys who were on their way to Montreal for a boys' weekend," she remembers. "They started drinking right after we took off and didn't stop. Hard liquor the whole flight.

I thought the flight attendants would stop serving them but they didn't, because one of the guys was tipping them $20 each round." Instead of cutting off the passengers, she made all of their drinks doubles, as they requested. "It was completely obnoxious," she adds.

Who doesn't have a story to tell about having one too many on a plane? Here's Denise Vardakas': She and her mother were flying from San Diego to Grand Cayman, and on their final leg they enjoyed "endless Jack and Diet Cokes." She adds, "We were having a great time chatting with the crewmembers, and a few of our fellow passengers." On their way back a week later, the same crewmembers greeted them as the "Jack and Diet" ladies. Oh, my.

If you're off the booze, a plane trip is a relapse waiting to happen, say experts. "I'm still constantly surprised by how many of my patients will relapse or overdrink on planes," says Carrie Wilkens, the co-founder and clinical director of the Center for Motivation & Change, a private group practice in New York that specializes in treating addiction and compulsive behaviors.

"It's gotten to the point where I've heard it as a therapist so regularly that now, when any one of my clients is planning a trip, I tell them, 'OK, we have to make up a plan for how you're going to manage this flight.'" Her patients inevitably agree that they drink more in the air, and take precautions to avoid it.

7. How are you getting home?

Even if you survive your flight without incident, there remains the issue of getting back home. If you're planning to drive, you might keep the case of Dana Papst in mind. A few years ago, after disembarking from a US Airways flight on which he was served alcohol, he crashed his car, killing himself and five others. The FAA later cleared the airline of any wrongdoing.

I don't consider myself a modern-day prohibitionist, but I think these practical reasons for keeping the skies alcohol-free make sense.

Why not wait until you're home to crack open a bottle? It could make your next flight a better one -- if not save your life.