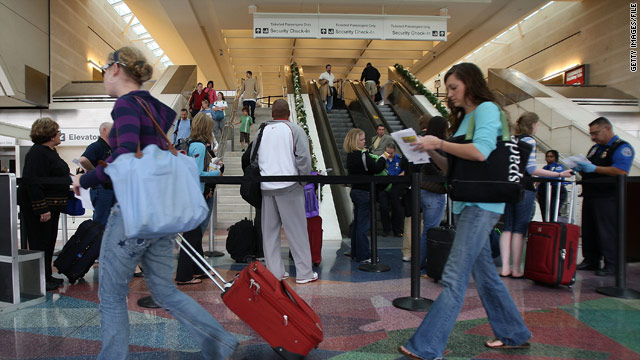 (CNN) -- A slightly higher number of Americans will travel Thanksgiving holiday weekend compared with last year, but those traveling by air is expected to decline, AAA said.

The association, which surveyed 1,350 American households, projects that 38.4 million Americans will travel over the holiday weekend, up from 37.8 million last year.

However, the number traveling by air is expected to decline to 2.3 million, the automobile association said. In 2008, 2.5 million Americans traveled by plane for Thanksgiving.

"We do this every year," said Mindy Potter of Atlanta, Georgia, who was flying with her husband and 6-year-old son. "It's insanity every year."

Potter said she and her family were headed Wednesday to Hot Springs Village, Arkansas, to see her husband's family.

She said they were allowing themselves plenty of time at the airport. "My husband's a stickler for going early," she said. "If I was in charge of it, we'd probably have a frenzied rush."

AAA said the slight increase in the number of Thanksgiving travelers from last year reflects improved consumer confidence as well as "a growing sense among many consumers that the worst of the global economic crisis is behind us."

Travelers are still concerned about the economy, said AAA spokesman Geoff Sundstrom, and the numbers remain well down from two years ago.

"Clearly, there was a huge drop-off in the number of people traveling last year," he said. According to the association, Thanksgiving travel dropped 25.2 percent last year, compared with 2007.

Still, Sundstrom added, "We are encouraged that the numbers have stabilized and turning up from what they were a year ago."

The bulk of Thanksgiving travelers -- about 33.2 million -- will be traveling by car, AAA said.

Jennifer Burrell of Tucker, Georgia, said she, her husband and their two daughters were driving Thursday morning to the Asheville, North Carolina, area, and will return Sunday.

She said she wasn't expecting traffic on the way there but "it always gets heavy" on the return trip.

Citing excess baggage fees and surcharges for jet fuel, along with delays and flight groundings, Sundstrom said that it's "not a very friendly environment this decade for the airline industry or the airline traveler."

As in earlier years, the Federal Aviation Administration said military airspace will be opened to commercial flights along the East and West coasts and in the Southwest in an attempt to alleviate congestion.

The airspace will be opened from Tuesday to Monday, spokesman Paul Takemoto said.

As of Tuesday afternoon, the FAA Web site was reporting slight delays because of "weather/wind" at New York's LaGuardia Airport.

Of course, some Americans are not traveling at all.

Heather McKinnon of Broomfield, Colorado, said she is staying home with family for Thanksgiving.

"I don't like to fly and really rarely like flying on holidays," she said, adding that she would consider driving.

"I know what it's like going through the airport," she said. Plus, she added, "Everything I love is here."