(Coastal Living) -- Leave behind the mainland and sneak away to these heavenly hideaways. 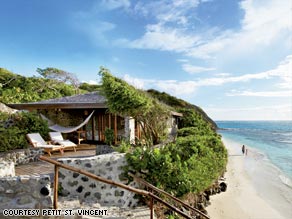 The fantasy: Your own sun-blessed, beach-fringed island in the Caribbean, with sailing, snorkeling and other pastimes available at your whim, and a staff to provide anything from meals to massages.

The reality: At Petit St. Vincent, it's the same as the fantasy. Twenty-two understatedly elegant stone cottages, overlooking the water and open to the breezes, scatter across this 113-acre island. With rates starting at $675 a night, Petit St. Vincent qualifies as a splurge, but the price covers all activities and meals. Open November through August; 800/654-9326 or psvresort.com.

The Inn on Peaks Island, Maine

Rocky, rustic, small-town New England floats languidly in Casco Bay, two miles from downtown Portland. Summer brings visitors seeking art galleries, nature and relaxation. In winter, you can snuggle up at the inn and enjoy the muted clang of buoys in the bay and the sharp scent of a wood fire.

The handful of cottages that make up this hideaway rest under coconut palms on Maui's North Shore, just off the scenic Hana Highway. "Old Polynesia" decor and a low-key atmosphere mark it as a throwback to an era when Hawaii meant tropical exoticism, not real-estate opportunities. Coastal Living: More on Maui

A short drive west takes you to the town of Paia. A short drive east reveals the bright sails of windsurfers swooping just off Hookipa Beach. And simply staying put ensures the pleasures of lounging on the sand in front of your cottage or savoring the seafood at Mama's Fish House Restaurant next door. Rooms from $175; 800/860-4852 or mamasfishhouse.com.

In the early 20th century, northern tycoons made Useppa their winter playground. Today, anyone can share its still-genteel lifestyle at the posh Collier Inn. Seven antiques-filled suites recall the pre-Depression boom years when ad exec and developer Barron Collier held sway over most of Southwest Florida, and gentlemen in white suits competed civilly at croquet.

The 80-acre island, accessible only by water and explored mostly by golf cart, contains neither cars nor roads. The Pink Promenade, a pathway of shells and pink sand, winds past banyan trees and tropical flowers. Prices range from $125 to $395; 239/283-1061 or useppa.com.

Technically Coronado is a peninsula, but it has been an island -- at least at high tide. And, true to island character, it feels like a place apart. The red-roof turrets and dormers of the 1888-vintage, beachfront Hotel del Coronado confirm it. Across the street, so does the Glorietta Bay Inn, which incorporates a 1908 Italian Renaissance mansion. Coastal Living: Southern California eateries

Rooms in The Del's rambling original building have more character, but the newer structures (especially the Beach Village cottages and villas) tend to offer nicer accommodations; 800/468-3533 or hoteldel.com. Rooms in the main resort range from $255 to $1,650; Beach Village accommodations range from $450 to $5,400. At the Glorietta, choose the mansion. Rooms start at $185; 800/283-9383 or gloriettabayinn.com.

Only the most spectacular scenery could draw tourists all the way to this remote Atlantic island on the eastern end of Nova Scotia. Cape Breton delivers; ask anyone who has ever driven the Cabot Trail along the coast of the ruggedly glorious Highlands.

Accommodations tend to be comfortable but rustic -- except at English Country Garden Bed & Breakfast (at Indian Brook), which opts for comfortable and luxurious. The four rooms include a tiny, secluded log cottage with a porch overlooking a small lake. The breakfasts and the optional, reservation-only dinners are equally sumptuous. Rooms from $120 Canadian (about $98 US); 866/929-2721 or capebretongarden.com.

Tucked away next to the airport, of all places (but away from the flight paths, so jet noise does not intrude), Casita de Maya provides the perfect headquarters for a getaway. The four rooms, beautifully appointed in earthy colors, open onto a pretty little courtyard with a pool. Owner Dan Komorowsky and his staff can answer any question about the island and arrange expeditions. They also know when to disappear and give guests time for themselves. Rates from $59; 281/214-1122 or casitademaya.com.

Like most out-of-the-way places, Lopez (north of Seattle in the San Juan Islands) attracts residents who want to do something different. As you meander the mostly flat roads, you'll encounter organic farmers and winemakers, cattle ranchers, artists and such establishments as the Love Dog Café and Vortex Juice Bar & Good Food.

MacKaye Harbor Inn, in a huge restored farmhouse near the south end of the island, lends guests mountain bikes to explore. Of course, you'll want to be back at the inn in time for evening chocolates and spectacular sunsets. Rooms from $135; 888/314-6140 or mackayeharborinn.com.

A 19th-century limestone industry left this Lake Erie island (off Sandusky) with a 21st century legacy of grand Victorian houses. You can't miss this bed-and-breakfast, with its bright coral-and-aqua exterior. Despite the punchy paint job, the rooms are traditional and refined.

Guest perks include onsite spa services and sailing trips on Lake Erie. Alas, the inn operates only April through October. But that does cover the summer tourist season, as well as the spring and fall, allowing a chance to catch sight of migrating raptors, waterfowl and songbirds. Rooms from $199; 800/884-5143 or watersedgeretreat.com.

You probably don't vacation with an entourage that requires a 25-room mansion, but a century ago you might have -- if you were a Rockefeller. In the late 1800s, America's business elite began gathering at Jekyll Island each year for winter vacation. Some stayed in the extravagant clubhouse; others built grand holiday homes nearby. Coastal Living: What to pack for coastal Georgia

The Jekyll Island Club Hotel now occupies the clubhouse and several other historic buildings, including a couple of the cottages, keeping up the standards splendidly. You can wander the 240-acre Millionaire's Village and envision yourself in the Gilded Age. And you can play golf and tennis, cruise around the island by bicycle, inhale the fresh salt air on the beach, and ride in a horse-drawn carriage. Rooms from $149; 800/535-9547 or jekyllclub.com.