NEW YORK (CNN) -- The pilot who landed a crippled US Airways jetliner on the Hudson River thought there would have been "catastrophic consequences" if he tried to make it to a nearby airport, a National Transportation Safety Board official said Saturday night. 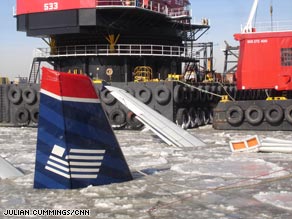 US Airways Flight 1549 remained in the icy Hudson River on Saturday.

Instead, pilot Pilot C.B. "Sully" Sullenberger decided to ditch the plane in the Hudson River close to vessels moving about the water "to improve chances of recovery," NTSB board member Kitty Higgins said. It was the first time the public heard comments from Sullenberger and first officer Jeffrey B. Skiles describing Thursday's emergency landing.

Skiles was flying US Airways Flight 1549, bound for Charlotte, North Carolina, when he noticed a flock of birds less than 90 seconds after the plane had taken off from New York's LaGuardia International Airport, Higgins said.

In an instant, the plane was rocked by loud thuds and both engines went out, Higgins said.

"He commented on the formation, and he said the next thing he knew, the windscreen was filled with birds. There was no time to take evasive action," Higgins said.

Sullenberger took control of the aircraft while Skiles began complicated procedures to try to restart the engines, Higgins said.

Sullenberger thought the plane was moving "too low, too slow" to risk returning to LaGuardia through the maze of buildings. Nor did Sullenberger think the powerless aircraft could make it over the densely populated New Jersey area to Teterboro, Higgins said.

"There could be catastrophic consequences if we didn't make it," she quoted Sullenberger as saying.

City officials, passengers and aviation experts have lauded Sullenberger and the flight crew for their handling of the landing and also praised first responders who acted quickly to minimize passengers' injuries in below-freezing temperatures. All 155 people on board the plane survived.

Neither Sullenberger nor Skiles attended the news conference.

Earlier in the day, the NTSB revealed the content of communications between the cockpit and controllers at LaGuardia in the brief period during which the incident unfolded.

"This is cactus 1549, hit birds, we lost thrust in both engines," Sullenberger told controllers at approximately 3:27 p.m. Thursday. "We're turning back towards LaGuardia."

Controllers immediately began preparations to clear a runway for an emergency landing, but less than a minute later, Sullenberger reported that the aircraft wouldn't make it, Higgins said.

The last communication from the plane to controllers, Higgins said, was the pilot saying, "We're gonna be in the Hudson."

Higgins also quoted two of the flight's attendants, who were in jump seats at the front of the aircraft when they heard a loud thud shortly after takeoff.

"It was a sound that neither one of them had ever heard before," Higgins said. "They said all the engine noise ceased. They described it as complete silence, like a library."

Efforts to raise the jetliner from the river proved successful late Saturday, as cranes lifted it clear of the water about 11:30 p.m. ET following several hours of work by crews in frigid conditions.

Video from the scene showed the right side of the aircraft with the engine intact but its covering mangled. It was not clear visually whether the damage was from an in-flight incident or from the landing impact.

Investigators planned to tow the plane on a barge to an undisclosed location for their examination.

Searchers using sonar think they have found the left engine on the river bottom. Divers will try to confirm the finding, Higgins said.

The flight data and cockpit voice recorders -- both crucial to determining exactly what happened Thursday -- remained on the aircraft, which was still largely submerged in the Hudson River but was secured to moorings.

Strong currents and cold water thwarted divers' efforts to retrieve the recorders from the tail section of the jetliner, Higgins said.

Also Saturday, authorities released audio and transcripts of two 911 calls from people who said they saw that the plane was in trouble.

One caller said he saw the plane descend and reported hearing a loud noise shortly after the aircraft took off.

"Oh, my God! It was a big plane, I heard a big boom just now. We looked up, and the plane came straight over us, and it was turning. Oh, my God!" a man calling from the Bronx told a 911 operator at 3:29 p.m., three minutes after the plane left LaGuardia.