'Queen of Soul' not pleased with performance at inauguration 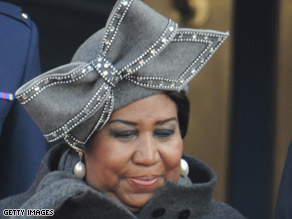 Aretha Franklin says cold weather affected her voice during her performance at the inauguration on Tuesday.

CNN's Larry King talks with "The Queen of Soul" about the reality of the nation's first black president, singing at the inauguration and the much-talked-about hat she wore.

Larry King: Where'd you get that hat?

Aretha Franklin: Well, I bought it at a little millinery that I frequent out in Detroit.

Franklin: Oh. What a tremendous, mammoth morning, evening, the ball, everything, from one event to the other, was just too much.

King: How did you find out you were singing?

Franklin: My agent called me and he told me that he had received an invitation and a telephone call, asking for my presence and performance at the swearing-in and the inauguration.

King: Did you choose the song?

Franklin: Yes, I did.

King: Is that a tough song to sing?

Franklin: No, not at all, but (Tuesday) it was. Mainly because of the temperature outside. I don't have to tell you, it was freezing, if you were there. Some singers it doesn't bother, and others it does. I don't care for it. It affected my voice.

King: You sang at Martin Luther King's funeral. What do you remember about that?

Franklin: There were very, very long lines, of course. I recall walking in the street behind the bier, somewhere maybe about 200, 300 feet from the bier, I think. I recall Leontyne Price being there, as well as Eartha Kitt. They shuttled us from one point to the other. The passing of a great man was at hand.

King: How did you feel yesterday about seeing a young black man elected president?

Franklin: Oh boy, how do you put it into words? There's a love affair going on with the country and Barack. I think it's the age of Barack. People have just fallen head over heels in love with him. His ascent to the presidency was miraculous. But we have to remember that he's not going to work miracles right off the top. It's going to take time.

(There's) a lot of problems, and there's a plethora of things to deal with for he and his administration.

King: One thing, with your magnificent voice, is it hard to sing outdoors?

Franklin: It depends on the temperature. Yesterday, Mother Nature was not very kind to me. I'm going to deal with her when I get home. It, by no means, was my standard. I was not happy with it, but I just feel blessed because it could have been five above zero or five below zero like it is in Detroit.

I was still blessed to be able to pretty much just sing the melody, but I wasn't happy with it, of course.

King: It was great to listen to.

Franklin: I was delighted and thrilled to be there. That was the most important thing, not so much the performance, but just to be there and to see this great man go into office -- the promise of tomorrow coming to pass.

All About Aretha Franklin • Barack Obama