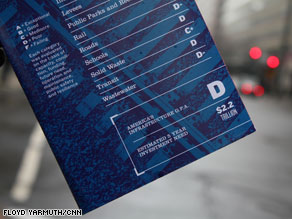 "We've been talking about this for many many years," Patrick Natale, the group's executive director, told CNN.

"We really haven't had the leadership or will to take action on it. The bottom line is that a failing infrastructure cannot support a thriving economy."

Watch what the report had to say »

The ranking -- which grades the condition of 15 infrastructure entities such as roads, bridges and dams -- is the same as the the last time such a report was issued, in 2005. In 2001, the grade was D+, slightly better but still poor.

Roads got a D-, with Americans spending more than 4.2 billion hours a year stuck in traffic. "Poor conditions cost motorists $67 billion a year in repairs and operating costs. One-third of America's major roads are in poor or mediocre condition and 45 percent of major urban highways are congested," the engineers' report said.

Inland waterways, D-. "The average age of all federally owned or operated locks is nearly 60 years, well past their planned design life of 50 years. The cost to replace the present system of locks is estimated at more than $125 billion."

Levees, D-. Many levees are locally owned and maintained, but they are aging and their "reliability" is not known. "With an increase in development behind these levees, the risk to public health and safety from failure has increased."

Solid waste got the highest grade at C+ because of success in recycling. "More than a third was recycled or recovered, presenting a 7 percent increase since 2000."

Bridges get a C. One in four of the country's bridges "are either structurally deficient or functionally obsolete." The report cites progress in reducing such structures in rural areas but the problem is increasing in urban areas.

Rail gets a C-, with the report noting that a "freight train is three times as fuel efficient as a truck, and traveling by passenger rail uses 20 percent less energy per mile than traveling by car."

A C-minus was also given to public parks and recreation, with parks, beaches and other facilities generating jobs, income, and cleaner air and water.

The national power grid received a D+. "Progress has been made in grid reinforcement since 2005 and substantial investment in generation, transmission and distribution is expected over the next two decades."

The other categories -- aviation, dams, hazardous waste, schools and transit -- each received a D.

The group estimates that the government and the private sector need to invest $2.2 trillion over five years, roughly three times the size of President Obama's stimulus package.

Natale says there's been a mentality in the United States of short-term fixes and hoping that they work -- "patch and pray," as he puts it.

CNN's Joe Sterling and Jeanne Meserve contributed to this report.

All About Civil Engineering