WASHINGTON (CNN) -- The U.S. Army is recalling more than 16,000 sets of body armor even though the secretary of the Army disagrees with a Department of Defense report that some of the ceramic plates failed testing and might not offer the protection required for troops on the battlefield. 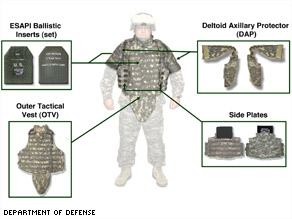 At issue are the removable bullet-proof ceramic plates that are part of a soldier's body armor.

The report by the Department of Defense inspector general's office, expected to be released officially on Friday, says the Army had flawed testing procedures before awarding contracts to make the armor plates.

"DoD does not have assurance that its body armor provides a standard level of protection," according to the report.

Army Secretary Peter Geren denied any problems with testing but said the armor is being recalled as a precaution and will be replaced with other plates that are not part of the recall, according to Army officials.

The recall represents only about 1.6 percent of the 1.9 million sets of body armor that have been put in the field since 2001, Army officials said. Ceramic plates are the bullet-proof part of a soldier's body armor that slide into the front and back of the vest.

In a letter of response to the report from Inspector General Gordon Heddell, Geren said he did not agree with the findings and was supported by the military's preeminent testing expert.

"According to the DOT&E (director of operational test and evaluation), the plates at issue passed the tests. Again, that is not only the conclusion of the Army, but of the Department of Defense experts in the highly specialized field of ballistic testing," Geren wrote.

Because there is a disagreement between two Department of Defense entities, Geren is forwarding the matter to the deputy secretary of defense to make a final ruling on whether the questioned armor should be discarded or returned to the inventory for possible use, according to Army officials.

The report focused on a number of issues, many of which the Army agreed with. However, the Army and the inspector general are at odds over a testing step called "first article testing," initial testing of a product to meet Army standards. The inspector general says the Army did not perform the tests correctly on some of the plates. Army officials said there is no evidence of any imperfections in the plates.

The inspector general's report also questioned why the Army had different criteria than the U.S. Special Forces in its testing of the equipment.

"The criteria differed significantly, even when testing against the same threats," the report said. "Differences included the number of plates tested (sample size), the shot pattern, the environmental conditions, the type of tests, and the pass/fail guidelines."

Army officials close to the issue said not one soldier had been killed because of an armor defect. Officials said the Army has X-ray machines in the field to examine damaged plates to look for problems and build an information database to improve on the armor technology.

Rep. Louise Slaughter, D-New York, who requested the audit and has been pressing the issue of looking into body armor since 2006, said that while the recall represents a relatively low percentage of plates, there is still a potential danger.

"It is way too high for me. We don't know how many soldiers could not live or escape being egregiously wounded because their body armor did not work," she said.

The inspector general audit is the second requested by Slaughter, who did not like the initial findings and thinks the Army is wrong in its thinking about the current findings. She called the report "devastating."

"It was their responsibility to make sure that [the body armor] is state of the art and it will do everything it can to protect that soldier," she said. "I am anxiously awaiting the results of this dispute."

All About U.S. Army • U.S. Department of Defense • Louise Slaughter