CLARENCE CENTER, New York (CNN) -- President Obama on Friday praised Beverly Eckert, the widow of a September 11 victim and a prominent post-9/11 activist, who was one of the passengers who died in a plane crash outside Buffalo, New York. 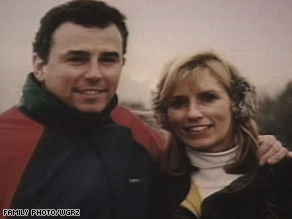 Sean Rooney and wife Beverly Eckert in an undated photograph.

"Beverly lost her husband on 9/11," Obama said, "and became a tireless advocate for the families whose lives were forever changed on that September day."

A resident of Stamford, Connecticut, Eckert was the widow of Buffalo native Sean Rooney, who died at the World Trade Center.

Obama's words underscored the shock and grief from friends, family and acquaintances over the news that Eckert was aboard the Continental Connection Flight 3407. The turboprop plane crashed Thursday, killing all 49 aboard and one person on the ground.

"Tragic events such as these remind us of the fragility of life and the value of every single day. And one person who understood that well was Beverly Eckert, who was on that flight and who I met with just a few days ago," Obama said in brief remarks.

Obama met Eckert at a gathering of September 11 victims' families on Friday.

Valerie Lucznikowska, a member of September 11th Families for Peaceful Tomorrows, said she, Eckert and another woman traveled to Washington for the meeting.

Lucznikowska said Eckert asked Obama whether the group would have ongoing meetings with his administration. Obama said there would be, even though they wouldn't necessarily be with him.

After the 2001 terrorist attacks, Eckert co-founded Voices of September 11, an advocate group for survivors and families.

Eckert had a reputation as a strong campaigner of September 11 families, involved in protests leading to more land for a ground zero memorial, working on the September 11 Commission's Family Steering Committee and pushing for a victims' families compensation fund.

She was traveling to Buffalo for a celebration of what would have been her husband's 58th birthday.

Eckert planned to take part in presenting a scholarship award at Canisius High School that was established in honor of her late husband, who was an alumnus, according to the school's president, John Knight.

Obama mentioned the scholarship plans in his remarks Friday.

"In keeping with that passionate commitment, she was on her way to Buffalo to mark what would have been her husband's birthday and launch a scholarship in his memory. She was an inspiration to me and to so many others, and I pray that her family finds peace and comfort in the hard days ahead," Obama said.

Lucznikowska, whose nephew died in the World Trade Center attacks, said she was "horribly saddened by this news."

"I would very much like to honor her. She was truly a wonderful person. She was someone who was trying to make society better."

The group elaborated on this stance in a signed letter to Obama, and Eckert gave a presidential aide a separate letter listing her own concerns, Lucznikowska said.

He said Eckert also had been active in a capital campaign fundraising effort.

"She struck me as a wonderful, beautiful person who clearly wanted to do something to remember her husband in a way that would have an everlasting impact on our community," Knight said.

Gordon Felt, president of the Families of Flight 93 Inc., the plane that crashed near Shanksville, Pennsylvania, on September 11, also expressed his grief.

"We note with deep sorrow the passing of Beverly Eckert in the Buffalo plane crash. She was a 9/11 family member who brought to light issues of importance to all of us -- and to all Americans. We extend our condolences to her family and to all those who loved her. She will be missed."

Jay Winuk, a September 11 organizational leader who lost his brother in the World Trade Center, said that although he did not know Eckert personally, "it is clear that she was a terrific advocate for the 9/11 family community."