(CNN) -- The Continental Airlines plane that crashed in Clarence Center, New York, late Thursday is one of several major incidents over the past two months. 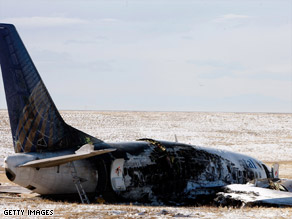 The wreckage of a Continental Airlines 737 sits off a runway at Denver International Airport in December.

• On January 27, Empire Airlines Flight 8284 crashed 300 feet short while on approach to a runway at Lubbock International Airport in Texas. The plane was arriving from Fort Worth, Texas.

The aircraft was destroyed by the crash and a post-impact fire. Two crew members suffered minor injuries.

• On January 15, U.S. Airways Flight 1549 ditched in the Hudson River while en route from LaGuardia Airport to Charlotte, North Carolina. All 155 passengers survived, with few injuries.

• On December 20, 2008, Continental Flight 1404 departed the left side of the runway during takeoff from Denver International Airport in Denver. The flight was en route to George Bush Intercontinental Airport in Houston, Texas.

A total of 38 passengers and crew were taken to hospitals, and five were admitted. There were no fatalities. The airplane was substantially damaged and experienced a post-crash fire, which was located on the right side of the aircraft.

All About Continental Airlines Inc. • US Airways Group Inc.