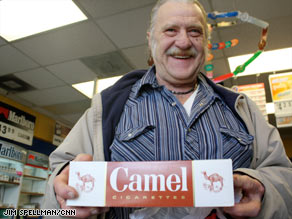 Coloradan Larry Jukes says he's upset about the hike but doesn't expect it will persuade him to quit smoking.

Thanks in part to the largest-ever federal cigarette tax increase -- a nearly 62-cents-a-pack hike that starts Wednesday but was reflected in many prices earlier -- Jukes on Tuesday paid more than $58 for a 10-pack carton at the Cigarette Store in Denver, Colorado.

That same store was selling it about $9 cheaper weeks ago. Jukes and other shoppers there said they feel stuck and taken advantage of.

"They're picking on us poor people, the ones that smoke," Jukes, a 65-year-old who has been smoking since he was a teen, said of the government. "They have been for years."

The cigarette excise tax that tobacco companies must pay the federal government rose Wednesday by 61.6 cents per pack, or $6.16 per carton. The tax now comes to about $10.10 per carton, or $1.01 per pack.

But major tobacco companies began incorporating that increase into their prices to wholesalers in March. And the companies, wholesalers and retailers in many cases gave prices a boost beyond the tax increase, in part to make up for an expected drop in sales caused by the hike, some of them said.

"We don't anticipate another raise for Wednesday. The [March increase in prices] was the raise," said Mary Szarmach, vice president at Colorado-based Cigarette Store Corp., which operates 85 stores in five states. "The manufacturers took what they needed beyond [the tax increase] to maintain their profit margin and take care of what they think will be diminishing sales. ...

"And to maintain gross profit margin, retailers in general tacked on a little, too."

Watch how and why the tax hike was instituted »

If the increase does scare off customers, 83-year-old Gloria Egger isn't likely to be one of them, she said. She said she's upset at the government for raising the tax, but Egger, who has been smoking since she was 18, isn't likely to quit. iReport.com: Share your thoughts on the tobacco tax increase

"I think it's ridiculous. ... They're picking on smokers," Egger said at the Denver store, where she bought two cartons Tuesday. "I think they're trying to run the tobacco companies out of business.

"As old as I am, I'm not going to quit smoking, regardless of what they do."

See other reactions to the tax hike »

Federal taxes also are going up Wednesday on other tobacco products, including cigars. Federal per-cigar taxes, which vary based on weight and price, used to be capped at 4.9 cents but now are capped at 40.26 cents.

The tobacco tax hikes, which President Obama signed into law in February, will be used to finance an expansion of the State Children's Health Insurance Program, or SCHIP. The expansion, which will cost $35 million over five years, is expected to secure federally funded health care for an additional 4 million children.

Before the expansion, SCHIP covered almost 7 million children whose parents earn too much to qualify for Medicaid -- the federal health insurance program for the poor -- but can't afford private insurance.

"I think tobacco, alcohol, that kind of stuff should be taxed instead of gasoline and food -- things that are necessary for people to survive," Bowersox said.

"There are [other] things that you could be targeting in the U.S. right now. Why the tobacco industry?" Fuller said. "I, personally, smoke cigars to relax. Why am I being punished for it?"

Jeff Borysiewicz, founder of Orlando-based Corona Cigar Co., said he believed the federal tax hike will cause cigar sales to drop. And he said the increase comes as Florida is considering a $1-per-cigar state tax hike.

iReporters debate whether the change in price is fair »

Cigarettes, too, have been hit by state excise tax increases. Since January 2002, the average state cigarette tax has increased from 43 cents per pack to $1.21 per pack, according to the Campaign for Tobacco-Free Kids.

A conservative estimate for the average per-pack cigarette price in the U.S., based on data collected from states and territories at the end of 2008 and adjusted for the federal tax increase, is $4.80, the group's Eric Lindblom said.

RJ Reynolds Tobacco Co. on March 16 raised its cigarettes' list prices by 41 to 44 cents per pack and, in many cases, reduced discounts to retailers, basically keeping "our pricing in line with the competition," spokesman David Howard said.

"The federal tax increase was the primary driver," Howard said.

Both companies said they expect a decrease in sales, with Howard noting industry analysts have estimated a drop of 6 percent to 8 percent. One factor in Philip Morris' decision to increase list prices beyond the tax hike was the company's expectation that the new tax level will decrease sales, Phelps said.

Not all U.S. sales declines would be due to smokers quitting, Phelps said.

"Tax increases create an incentive for people to bring cigarettes into the country illegally -- [from places] where they don't have to pay that higher tax," Phelps said.

Nick Hamad, a tobacco store owner in Seattle, Washington, said he thinks the tax will ruin the American tobacco industry.

As for Jukes, higher prices probably won't force him to quit smoking, he said.

All About Campaign for Tobacco-Free Kids • Barack Obama