CNN's Susan Lisovicz sat down with her uncle Lenny Lisovicz, a decorated D-Day veteran, to talk about his experiences at war. 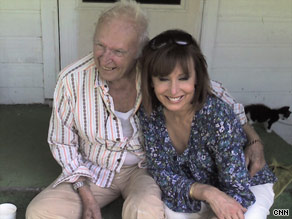 CNN's Susan Lisovicz spoke to her Uncle Lenny about his D-Day and war experiences.

For 65 years my family had heard whispers that he and 220 men stormed Omaha Beach and that he and his captain later went AWOL in Paris, France.

They heard he returned to combat and fought all the way to Germany and his courage was rewarded with the prestigious Silver Star.

Then -- after that sacrifice and loss -- he was committed to a hospital.

On the 65th anniversary of D-Day, Uncle Lenny finally talked at length about everything he had seen and done. And he said it was all true.

Nowadays, Uncle Lenny lives a tranquil life. At 91, he is proud of his garden, where he grows corn, tomatoes and grapefruit. He takes in stray cats, attends Mass and sends money regularly to Catholic missionaries.

But his thoughts are never far away from a sliver of sand thousands of miles away. He turned down my offer to visit Normandy.

But now, he finally agreed to share his memories.

It began with The Longest Day: June 6, 1944. My uncle was a 26-year-old lieutenant with the Army 1st Infantry Division, the famed "Big Red One." They had been training in England for something big for months.

Then, over the loudspeakers in the barracks came the famous declaration from Gen. Dwight Eisenhower: "You are about to embark on the Great Crusade."

The Germans were taken by surprise in one of the greatest amphibious invasions of all time, which would mark a turning point of the war in Europe.

"I just imagined what that enemy observer felt when he looked through that concrete bunker and looked out at that ocean and all he could see was boats, warships," Lisovicz said.

But the Nazis had a superior position.

"They had you pinpointed. It was just like shootin' ducks on a pond. Your comrades would get artillery busted. A hand flying here, a leg there, guts laying out on the ground, asking for help and you couldn't help them. You had to move. You just had to push them aside," he recalled.

But the Allies couldn't push their way onto the cliffs until a massive air assault began.

"At times there were so many planes in the sky you couldn't see the sky... ," Lisovicz said. "You could see them forming from all directions coming into one pattern. And that's how we got off the beach, darlin'."

Their orders were to meet up with the paratroopers, who landed behind enemy lines. My uncle said they found them by smell, because they were all dead.

"They backed them in a corner and machine gunned them down and didn't have enough decency to cover them," he said.

That was when an unwritten order came down: "No prisoners. And we didn't take any."

It was shortly after this that he decided he had enough. He and the captain went AWOL in Paris. To add insult to injury, they stole the major's jeep. Their freedom lasted only about a week.

"The MP told us he was going to shoot us for going AWOL. But who cares? You didn't care anymore," Lisovicz said. "You were just fed up with war, fed up with killing, just absolutely fed up."

But they weren't shot -- not by Americans, anyway.

My uncle and the captain went back into combat. The captain was killed by a camouflaged tank. My uncle was now the commanding officer. And the fighting was ferocious as he battled his way into Germany.

He set trip wires for flares in one pivotal battle. At about 3 a.m., the flares went off. It was chaos.

The Silver Star says "when strong forces of enemy infantry and tanks overran his platoon's outer defenses and approached the command post, Lt. Lisoviz then skillfully deployed men and weapons into strategic positions and with accurately directed fire, held the foe at bay until supporting troops arrived and repulsed the attack."

But there was more.

"When I looked up I seen a man walking up with two of my comrades. It was a German. So I went after him. And got him and brought my men back," he said.

The Silver Star described it as "extraordinary gallantry and aggressive leadership."

Only 22 of the 220 men that stormed the beach with him came home alive.

That was the last time my uncle saw combat. He had been hit. He learned about his Silver Star in the hospital.

He wanted to return, but he was shell-shocked.

"It took them a year and a half of my life for them to straighten me out and get back to civilian life," he said.

All About Germany • World War II