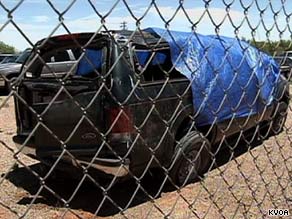 This Ford Excursion was packed with 22 passengers inside when it crashed in Arizona late Saturday night.

The Ford Excursion crashed at about 11:55 p.m. Saturday in a remote area about 30 miles north of the Mexican border, ejecting almost all the 22 passengers inside, police said in a statement.

In addition to the dead, 12 people were hospitalized.

The identity of the driver, passengers and owner of the Excursion were not released.

All About Arizona • Traffic Accidents