HUNTINGDON VALLEY, Pennsylvania (CNN) -- The president of The Valley Swim Club on Friday strongly denied charges of racism after his club canceled the swimming privileges of a nearby day care center whose children are predominantly African-American. 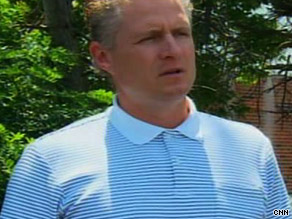 John Duesler said he underestimated the number of swimmers who would come to swim at the club.

"It was never our intention to offend anyone," said John Duesler. "This thing has been blown out of proportion."

Duesler said his club -- which he called "very diverse" -- invited camps in the Philadelphia area to use his facility because of the number of pools in the region closed due to budget cuts this summer. He said he underestimated the amount of children who would participate, and the club's capacity to take on the groups was not up to the task.

The Creative Steps Day Care children -- who are in kindergarten through seventh grade -- went to The Valley Swim Club in Huntingdon Valley on June 29 after the center's director, Alethea Wright, had contracted to use the club once a week.

During their first visit, some children said they heard club members asking why African-American children were there. One youngster told a Philadelphia television station a woman there said she feared the children "might do something" to her child.

Watch Wright react to comments allegedly aimed at the children »

She was dismissive of Duesler's comments Friday.

"He knows what happened at the pool that day," Wright told CNN in a telephone interview. "I was embarrassed and humiliated."

Watch the club president say racism is not at play »

After news reports of the incident, the office of Sen. Arlen Specter (D-Pennsylvania) said Specter sent a letter to the club president asking him to reinstate the contract with Creative Steps, saying, "I think that you would agree that there is no place for racism in America today."

Duesler said he appreciates the senator's concern, but the club's board has yet to make a decision of how it will proceed.

"If we're going to revise our policies here, we need to make it so for all the camps," he said. "I just don't think we're prepared for that."

Duesler earlier in the week told two Philadelphia television stations the children had changed "the complexion" and "atmosphere" of the club, a comment that protesters outside the facility Thursday said showed that racism was involved.

"He's not one of the good guys -- he's one of the great guys," she said, holding back tears. "He doesn't deserve this."

She added, "If there really was a racial issue that happened, my husband and I would be the first one[s] picketing."

Jim Flynn, who said he was one of the club members who made a complaint against the children, told CNN this week it was not racially motivated.

"There were a lot of children in the pool and not enough lifeguards," he said. "As general members we were not told that they were coming. If we knew, we could decide to not come when the pool was crowded or come anyway. We could have had an option."

He also said invitations to two other day care centers, neither of which contained minority children, had previously been withdrawn.

Girard College, a private Philadelphia boarding school, told CNN on Thursday it would offer Creative Steps Day Care use of its facilities this summer.

All About Philadelphia • Racial Issues