NTSB: Sleep disorder may have contributed to Boston train crash

WASHINGTON (CNN) -- A Boston trolley operator killed in a crash last year likely had a sleep disorder and fell into a "micro-sleep" shortly before the collision, the National Transportation Safety Board ruled Tuesday. 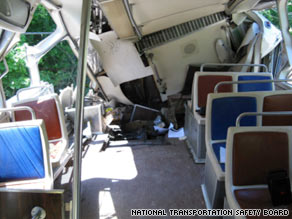 Since last year's trolley crash in Boston, Massachusetts, there has been another incident on the same line.

The safety board, completing a 14-month investigation, faulted operator Ter'rese Edmonds for ignoring a red signal along the tracks but directed harsh criticism at the Massachusetts Bay Transportation Authority which operates the train system.

The transit authority failed to screen operators for sleep disorders while enforcing a work schedule that could prevent train operators from getting enough sleep, the NTSB said.

The NTSB's conclusion that Edmonds fell asleep is partly conjecture, the board acknowledged. Edmonds, a part-time trolley operator, had an opportunity for adequate sleep the day of the wreck, although investigators were not able to determine her sleep history.

In addition, Edmonds had been given a break earlier in the day, had not complained to co-workers about fatigue and was found to be free of drugs and alcohol.

"We cannot say for certain that she did have it (sleep apnea)," board member Dr. Mitch Garber said.

But the NTSB concluded there was a "high likelihood" that Edmonds had an undiagnosed sleep disorder, largely because she was obese and because tests showed she had taken doxylamine, an ingredient commonly found in sleep aids, suggesting she had trouble sleeping during at least one of the nights leading up to the accident.

In addition, there is a lack of other evidence to explain why Edmonds failed to slow or stop the train, the board concluded.

Tests showed that the stopped train could be seen at a distance of 764 feet, and that "there were multiple opportunities to slow and stop this (advancing) train," NTSB investigator Wayne Workman said. "There was not any evidence that brakes were applied."

An estimated 185 to 200 passengers were on the two trains during the collision in the Boston, Massachusetts, suburb of Newton. Damage was estimated at $8.6 million.

The board also noted that the MBTA had not installed systems on its Green Line to prevent two trains from occupying the same stretch of track, the NTSB said.

The systems, known as "positive train control" systems, would have prevented the accident, the safety board said.

One year after the fatal accident, more than 50 people were injured in another accident on the same line.

The Boston accident highlights two issues that have risen to the top of the NTSB's concerns in recent years, positive train control and operator fatigue. The safety board says positive train control issues were involved in two other light rail incidents this year, a May 8 wreck on the same MBTA Green Line and a June 22 wreck which killed nine on Washington, D.C.'s Metro system.

"If technology exists... on the other (MBTA) lines, why would the Green Line not have everything possible... to prevent accidents from happening," NTSB Chairman Mark Rosenker asked. "I don't understand that as an operator; I just don't."

The Metro system had a form of positive train separation, but investigators are exploring whether that crash resulted from a circuit malfunction.

The safety board said fatigue issues affect all forms of transportation. It noted that two pilots fell asleep during a flight over Hawaii and that sleep issues played a role in a Cosco Busan ship incident in San Francisco, California, and a fatal bus crash in Mexican Hat, Utah.

Rosenker said details that surfaced in the Boston trolley crash will guide the NTSB in the future.

"Now it is up to us, because we now are the advocates for these changes," Rosenker said. Recommendations resulting from the Boston crash "raise the bar of safety not only in this system, but across the United States."