ON PUGET SOUND, Washington (CNN) -- When commercial diver Kenny Woodside takes to the depths, he enters a world of murky low light and dangerous currents. 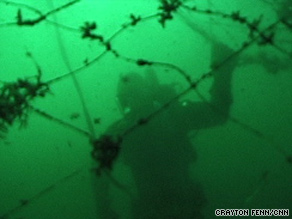 Diver Kenny Woodside descends to the murky depths to retrieve an abandoned net.

Until recently Woodside and about 100 hundred other divers searched Puget Sound for sea cucumbers and urchins to sell to buyers in Asia, where the items are considered delicacies.

But demand for the fishermen's catch dried up with the worldwide economic crisis and left many of these divers without a reason to go out on the water.

"The fishing industry has slowed from a full-time job to just a couple months a year," said Doug Monk, the captain of the boat from which Woodside dives. "The red sea urchin market is almost non-existent."

But thanks to a small piece of the federal stimulus recovery plan, Monk, Woodside and about 40 other fishermen will get back to work hauling in a very different catch: lost fishing nets.

While many stimulus projects have come under fire as pork barrel spending, backers of the nets program say it is a model for helping those battered by the economic downturn while completing needed public works.

Thousands of the large nets stretch across the floor of Puget Sound, where they create an environmental hazard. Some of the nets were lost by fishermen to the rocky coastline decades ago but continue to catch and kill.

According to the Northwest Marine Conservation Initiative, the nets are responsible for killing tens of thousands of marine life, mammals and birds every year.

The nets, some of which extend larger than a football field, can also tangle the propellers of boats and pose a danger to scuba divers.

After struggling to find funding, the group received $4.6 million in stimulus funds to recover most of the nets that litter the unique Puget Sound ecosystem.

The only reason the nets have remained underwater for so long, said Ginny Broadhurst, director of the Northwest Marine Conservation Initiative, is because the damage they are doing to the environment is invisible from the surface.

"If you had nets strung along the streets that are catching bunny rabbits and squirrels, we wouldn't be discussing whether we should be removing them. We would be pulling them. It would be immediate," said Broadhurst. "When those threats are underwater it's so much harder to know what impacts they are having."

But pulling those nets is no easy task.

Divers swim close to 100 feet down to an environment that is anything but friendly. Instead of using scuba equipment, they breathe through air hoses running from the boat above. When the divers find the fields of nets, they begin the labor of cutting them free piece by piece and all by hand. Removing one net can take days.

Watch the divers at work »

The nets are then pulled to the boat waiting on the surface. In just a few hours on the water, the divers can pull free about 1,000 pounds of nets. Inside are the bones of countless fish and birds, along with several species of protected sharks and crabs. Anything still alive is cut free and thrown back in the water. Then, biologist Jeff June notes what they have brought up. So far, he says, the group has identified 112 distinct species trapped in the nets.

The fishing nets themselves are considered toxic after the years of catching so much sea life. The divers seal them in heavy duty plastic bags and, once on shore, take the nets to a landfill. But biologist June said the group is working on a plan that would have the nets burned, creating energy from lost fishing nets.

Over the next 18 months the group expects to pull some 3,000 nets from Puget Sound. And in that time the fishing industry could bounce back from its slump, allowing Doug Monk and his crew to return to catching urchins and sea cucumbers.

But, the boat captain said, recovering the fishing nets has greater meaning than just riding out a rough economy.

"We feel we are doing a good thing," he said. "[With] harvest diving we are taking from the resources; here we are giving them back."

All About Economic Stimulus • Nature and the Environment