Rapper Ludacris, dealership give away 20 cars to drivers in need

MORROW, Georgia (CNN) -- Jobless for nearly a year, Michael Rivers was about to walk out of his house a few weeks ago to catch the bus for another daylong employment hunt when a radio announcement stopped him. 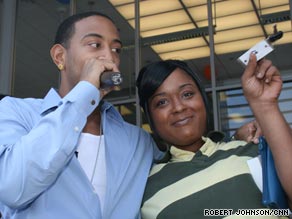 With Ludacris at her side, single mom Joya Montgomery, 26, proudly displays keys to her car Sunday.

The famous rapper was pulling an Oprah in his hometown of Atlanta, Georgia.

The rapper announced that if listeners were able to pay the taxes, registration, tags and insurance, they should go to his nonprofit Ludacris Foundation Web site and write 300 words about why they deserved new wheels.

"And make it good," Luda warned.

Four thousand people took him up on his challenge, and in a few days, more than 2,000 essays poured into the Nissan South dealership in Morrow, Georgia, that had teamed with the rapper on the used-car giveaway.

See and hear the winners tell their stories »

Rivers' essay was among them.

"I didn't even wait; I just continued out that door to the community center, sat at a computer and let all my emotions come out," he said.

Rivers described riding the city bus with his 14-year-old daughter to make sure she arrived safely at school and how he recently celebrated the small victory of getting his 17-year-old autistic son, who can't tolerate crowds, to stand calmly for a few moments outside the bus stop. He doesn't live near a grocery store so he has to bring home the food he can carry on the bus.

Rivers was laid off from his job as a court clerk in the summer of 2008, and making job interviews on time isn't easy when the bus is often late.

But on Sunday afternoon, Rivers was giddy, slightly bouncing as he spoke. He stood shoulder to shoulder among the 20 winners and their friends and families waiting to see their cars.

"I don't care what it is," Rivers said. "I'm grateful for any car with four wheels because it beats two heels."

Winners received 30 days of free gas, which will be a big help to Joya Montgomery, a 26-year-old single parent of a 4-year-old, 8-year-old and 3-month-old.

She has been waking before 5 a.m. and walking to the bus stop, while it's dark, with her children to begin a long journey to her job and to drop them off at school or a friend's home.

"It was scary at times," she said. "You don't even know who's out there. I was always looking over my shoulder.

In the parking lot, the crowd was dancing. But the bass of Ludacris' latest single blasting from the dealership's loudspeakers was secondary inspiration for one Atlanta grandmother. Fifty-one-year-old Vermelle Jackson was so excited to have a 2005 Mercury Sable to drive around grandchildren, nieces and nephews that she swiveled her hips around and dipped it shockingly low to the ground.

The concept seemed like a winner for everyone. Like many dealerships, Nissan South has not yet been reimbursed for the money it spent upfront during the federal government's Cash for Clunkers program that allowed customers to trade in older cars for $3,500 or $4,500 credit.

When the popular program ended August 24, the car dealer didn't want to turn away customers who kept streaming in, expecting to get the same discounts.

So Nissan South continued giving customers identical low rates and taking their used cars. The Cash for Clunkers program and the continued discounts totaled nearly $800,000 in the hole for the dealership, said owner Scott Smith.

"We're grateful for the Clunkers program because it really helped business, but it's a lot of money to be without," he said.

At the end of the year, the cars given away under the Luda program, which were not technically acquired during the Clunkers program, may be eligible as charity tax write-offs.

"We like to think of it as not being about the write-offs," White said. "It's more like we had a chance to do something positive in the community that is going through a really hard time right now."

White helped place a few radio spots and within two days, more than 2,000 essays had been sent in. That number quickly shot to close to 4,000.

Ludacris and his mother, Roberta Shields, who directs his foundation and helped give away the cars Sunday, and the rapper's foundation staff of about a dozen helped read the essays. To validate the stories they found most compelling, they made phone calls and interviewed people who knew the finalists.

"We ended up calling a homeless shelter to reach one gentleman whose cell phone had gone out, and he was recharging it," Shields said. "We didn't know if we'd get ahold of him, but we finally did. All he wanted was a car to help him go out for job interviews."

Ludacris was particularly moved by the story of a Sudanese refugee who has experienced every hardship imaginable, the least of which was a broken-down car. The two sat down Sunday and had a long talk.

"That's one of those stories that really had me like, man, I thought I had faced some adversities in life," the rapper said in a quiet moment away from the crowd. "But I've not faced adversities at all compared to what he's been through. I cannot imagine going through what he's gone through and still be that strong."

Mading Duor, who escaped civil war and was providing for his four children on a school maintenance worker's salary, was crossing a street in Decatur, Georgia, when a driver ignored a crosswalk and hit and killed his 4-year-old son.

"I don't expect anyone to understand [what I have been through], but I know that people come to me with a good heart now," he said. "I couldn't believe it when she called me to tell me. I said, 'You are kidding! It cannot be!' "

Neither McCrea, from Atlanta's affluent Buckhead area, nor Duor, neatly dressed in a shirt buttoned to the collar, seemed like Ludacris' demographic. They nodded their heads to his music anyway, smiling.

All About Ludacris • Atlanta