WASHINGTON (CNN) -- He's already served the time, but lawyers Thursday argued to clear his name as onetime U.S. Army Sgt. Michael Smith appeals a conviction for the torture of detainees once held at the Abu Ghraib prison in Iraq. 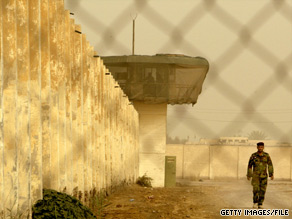 Abu Ghraib prison was taken over by the Iraqi government after claims of abuse by U.S. troops.

Disturbing snapshots and video portraying sexual humiliation and physical intimidation against the detainees tarnished the image of the United States as it fought to stabilize Iraq after the American overthrow of Saddam Hussein.

A military panel found Smith guilty in March 2006 on allegations that he used his military working dog to illegally "terrorize and frighten" detainees as part of interrogation techniques at the U.S.-managed facility in Baghdad.

But his lawyer, U.S. Army Lt. Col. Jonathan Potter, told a military appeals court Thursday that the conviction was based on faulty instructions to the jury.

"Nowhere in this case did the government establish that the use of the dog was illegal," the defense counsel said, noting that Smith "was not trained in interrogation techniques."

The military's prosecutor, U.S. Army Maj. Karen Borgerding, argued that Smith "would know it's unlawful" to use his unmuzzled dog to snarl within inches of a detained prisoner's face.

Smith was originally sentenced to 179 days confinement and received a bad conduct discharge.

Smith was not in the courtroom for the proceedings. Potter told CNN that he was not authorized to disclose his whereabouts but confirmed that his client remains on "appeal release" status after completing a three-month sentence.

If the appeal fails, the discharge stands. If the appeals court overturns the conviction, Smith could return to the military and may receive back pay, pension and other benefits. The judges did not indicate when they may rule after each side presented oral arguments Thursday.

At the 2006 court-martial, the jury found Smith guilty of charges that he used his military dog, Marco, to terrify prisoners, allegedly for amusement and in competition with other soldiers.

Smith also was found guilty of an indecent act involving his dog.

A female soldier testified on the first day of the court-martial that she had allowed Smith's dog to lick peanut butter she had placed on her bare chest as part of a dare from another soldier, who videotaped the stunt.

"It was foolish, stupid and juvenile," Smith said of the incident, reading from a statement. "There's nothing I can do to take it back. If I could, I would."

Smith did not specifically express regret for the wrongdoing involving detainees.