You know, some words are just annoying

NEW YORK (CNN) -- Nearly half of Americans surveyed said they find "whatever" to be the most annoying word or phrase, according to a poll by the Marist Institute for Public Opinion. 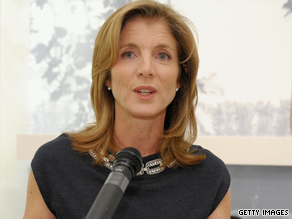 Politico.com counted Caroline Kennedy using "you know" 142 times in an interview with The New York Times.

The research center at Marist College did a telephone survey of 938 people that was prompted by a casual conversation with employees of the institute.

"What we chose were words that were used as 'dismissive,' " said Mary Azzoli, the institute's media director. "We chose words that we felt were overused."

"You know" was the second most annoying phrase.

That phrase was spotlighted last winter, when Caroline Kennedy was being considered for the U.S. Senate seat from New York, vacated by Hillary Rodham Clinton.

In a televised interview and in an interview with The New York Times, Kennedy used the words so much she was ridiculed by the New York media.

At one point, Kennedy said "you know" four times in one sentence.

"You know, I can tell you, you know, in my family, you know, there was a sense, you know, we have to work twice as hard," she said.

Respondents also said they were annoyed by the overuse of "anyway," "it is what it is" and "at the end of the day."

The words "whatever" and "anyway" re-entered the American pop lexicon following the release of popular films like "Clueless" (1995) and "Valley Girl" (1983). Both are about the shallow lives of teenagers in suburban California.

The Marist Institute and college are in Poughkeepsie, New York.

All About Caroline Kennedy • The New York Times Company