'Obama, I know you are listening': Gay rights activists march in D.C.

WASHINGTON (CNN) -- Judy Shepard stood before a massive crowd at the Capitol on Sunday for a single, painful reason. 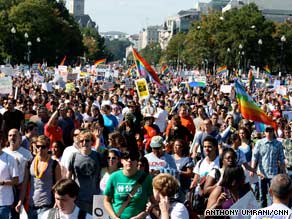 "I'm here today because I lost my son to hate."

Her gay son, Matthew Shepard, was kidnapped and severely beaten in October 1998. He died five days later in a hospital.

More than 10 years later, Judy Shepard addressed the thousands of gay rights activists in Washington who wrapped up Sunday's National Equality March with a rousing rally at the Capitol. iReport.com: See photos from the march

The activists marched through Washington, calling for an end to the "don't ask, don't tell" policy and equality in marriage.

Watch celebrities and others take a stand »

The National Equality March coincided with National Coming Out Day, and came a day after President Obama delivered a supportive speech to the nation's largest gay and lesbian rights group.

Obama was praised for his remarks to the Human Rights Campaign, where he said he has urged congress to repeal the Defense of Marriage Act and to pass the Domestic Partners Benefit and Obligations Act. But Obama has also been criticized by gay rights activists who say he has put those issues -- and the Pentagon's "don't ask, don't tell" policy, which bans homosexuals from openly serving in the military -- on the back burner.

"Obama, I know you are listening," pop star Lady Gaga told the crowd, before shouting, "Are you listening? We will continue to push you and your administration to bring your words of promise to a reality."

Shepard told the crowd she was confident in Obama's pledge, but that the activists could also play a critical role by contacting their congressional representatives and voting for politicians who support their cause.

Legislation bearing her son's name was passed in the House this week. It expands the definition of hate crimes to include attacks based on sexual orientation and gender identity. The legislation is awaiting a Senate vote.

"I can announce that after more than a decade this bill is set to pass and I will sign it into law," Obama said Saturday.

At the Capitol on Sunday, the participants spilled from the western front of the building, where a podium was set up, onto Pennsylvania Avenue. There was no official estimate of the size of the crowd.

Christine Quinn, the first openly lesbian speaker of the New York City Council, said she had one request for lawmakers at all levels across the country.

She continued: "So what we're here about today is to start telling the truth and to force the lawmakers from coast to coast and in the nation's capital to make our law books tell the truth."

Although Obama's speech Saturday was supportive of changes in the law to reflect equal rights in marriage and service to the military for homosexuals, given a full plate of other issues at home and abroad facing the administration, it remains unclear how quickly the issues at the center of Sunday's march will be addressed.

Even members of the president's own party are split.

"I've said in the past I don't think that's the way to go," Sen. Bob Casey, D-Pennsylvania, told CNN's John King, referring to the repeal of the Defense of Marriage Act. "We can move forward on a lot of measures, but I'm not sure there's the support yet for that."

"We are gathered here today from all over the U.S., and back home many of us are deeply embroiled in the particular local battles that we are fighting, but today is a national rally and when we walk away from here tonight, we need to walk away with a common national resolve," actor Cynthia Nixon, of "Sex in the City" fame, told the crowd.

A small number of counter-protesters gathered at the beginning of the march.