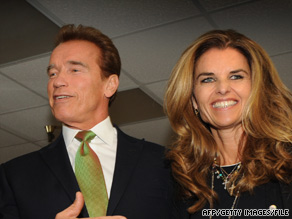 Web site TMZ posted a 17-second video Tuesday showing the California first lady apparently speaking into a cell phone while turning a corner in Brentwood in a black SUV. She puts the phone down part way through the video, but it's not clear whether she did so because she had finished her conversation or because she noticed cameras following her.

The site also photographed Shriver allegedly chatting while driving on Sunday and on June 12.

Shriver's husband, California Gov. Arnold Schwarzenegger, last year supported and signed into law a ban on using handheld communication devices while driving. Enforcement of the ban began July 1, 2008; it carries a $20 fine for a first violation; $50 for each subsequent offense. A similar law banning texting while driving took effect January 1 this year. Watch Shriver driving while on her cell phone

By the end of September, the California Highway Patrol had issued tickets for about 150,000 cell phone infractions, said Chris Cochran, spokesman for the California Office of Traffic Safety. No one keeps track of infractions cited by county and local departments, he said.

See where laws limit cell phone use in cars »

Shriver has not been cited. In Los Angeles County, where Brentwood is, the Superior Court has set the cost at about $93 for the first ticket and $201 for the next one, meaning Shriver would owe at least $300 in fines and court fees had she been caught by police, CNN affiliate KTLA-TV reported.

On Tuesday, Schwarzenegger sent a Twitter message to TMZ editor Harvey Levin: "Thanks for bringing her violations to my attention. There's going to be swift action." What that action might entail was not specified.

Shriver on Wednesday issued an apology:

"I'm sorry," she said in a statement. "I will be donating my favorite old cell phone to my Women's Conference partner Verizon through their HopeLine program that helps domestic violence shelters. I invite anyone else who wants to recycle their old phone to join me. That's my version of swift action with a higher purpose."

The traffic office referred questions about Shriver to the governor's office, which declined to comment.

"We don't really think that hand-held bans have a whole lot of impact," said Jonathan Adkins, spokesman for the Governors Highway Safety Association in Washington. The association urges drivers not to use phones, including hands-free devices, while driving, but does not support laws banning them, he said.

The attention to Shriver "alludes to a bigger problem, and that's the fact that everybody does it," Adkins said. "Not only are public officials doing it, but we have to educate the highway safety community. ... Cops frequently are on their cell phones when they drive.

"The Shriver case really underscores the scope of the problem. We have a lot of educating to do."

Shriver's most recent alleged violations come on the heels of AAA Northern California's "Heads Up Driving Week," during which the auto club urged motorists to get in the habit of driving without distractions such as cell phones, fast food and tuning the stereo.

"We hope that by driving distraction-free for a week, people can pick up the habit for life," AAA spokesman Matt Skryja said in a news release.

Seven states and the District of Columbia ban all handheld cell phone use by drivers. Several other states allow localities to set their own limits on cell phone use.