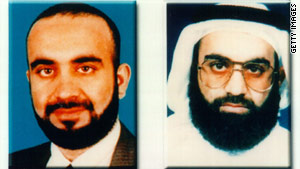 (CNN) -- Some family members of 9/11 victims welcomed the announcement that five Guantanamo Bay detainees with alleged ties to the attacks will be tried in a New York civilian court, while others blasted the decision.

"I'm very, very disappointed in the government," said Anne Ielpi, whose son, Jonathan Ielpi, was a firefighter who was killed in the south tower.

She said the five, who include confessed mastermind Khalid Sheikh Mohammed, should be tried in military court.

"It definitely should have been finished in Cuba," she said.

But others -- including members of the September Eleventh Families for Peaceful Tomorrows, some of whom spoke to reporters by phone on Friday -- said a civilian trial allows for transparency, noting that families of the victims could attend. Their access to a military trial would be more limited, they said.

John Leinung, whose stepson, Paul Battaglia, worked in the north tower, said the United States has a responsibility to "operate under our existing system of laws."

"I think our traditional court system is very capable of convicting guilty people," he said.

Dozens of family members of 9/11 victims have signed a letter to Attorney General Eric Holder, who announced the trial decision; President Obama; and Secretary of Defense Robert Gates opposing a civilian trial for the alleged plotters.

They said it would give the men a well-publicized platform, blocks from where the towers stood, in which they could espouse their views.

"It is incomprehensible to us that members of the United States Congress would propose that the same men who today refer to the murder of our loved ones as a 'blessed day' and who targeted the United States Capitol for the same kind of destruction that was wrought in New York, Virginia and Pennsylvania, should be the beneficiaries of a social compact of which they are not a part, do not recognize, and which they seek to destroy: the United States Constitution," the letter said.

However, Leinung said the trials offer an opportunity for justice.

"If we want the world to operate lawfully, if we want people to address their international grievances in a fair manner, we are under an obligation to do that ourselves," he said.