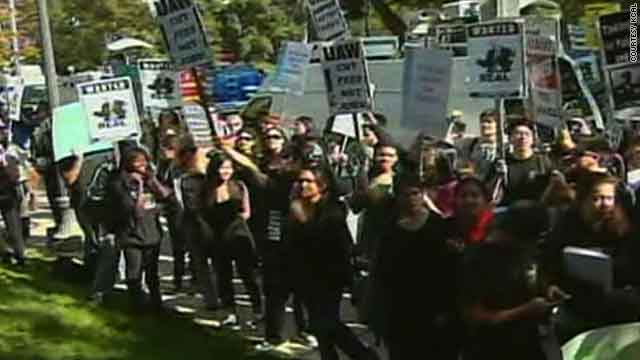 Students in Los Angeles, California, protest a 32 percent tuition hike approved by a Board of Regents panel on Wednesday.
STORY HIGHLIGHTS

Los Angeles, California (CNN) -- Amid student protests, the University of California's Board of Regents finance committee approved a 32 percent hike in undergraduate tuition fees Wednesday, to take effect on two steps over the next year.

The budget vote, during a meeting on the UCLA campus Wednesday afternoon, came as hundreds of students, faculty and campus workers protested outside.

Several students were arrested Wednesday morning after they disrupted the regents' meeting with chanting, police said.

Other protests, including "tent cities," were underway on other University of California campuses across the state.

The full board of regents is expected to approve the plan Thursday morning, University Vice President Lynn Tierney said.

The first tuition hike, which takes effect in January, will cost undergraduate students an additional $585 a semester, Tierney said.

The second hike kicks in next fall, raising tuition another $1,344, she said.

"It's going to prevent a lot of students from low-income families to be able to afford to come to this university," said Leah Johnson, a UCLA undergraduate student. "If there's a public university, it's suppose to represent the public."

The fee increases would be balanced by a raise in "the level of financial assistance for needy low- and middle-income students," according to a statement from the Board of Regents.

University executives told the regents the fee hikes are needed since they've already made deep spending cuts in the past two years -- cuts forced by the state budget.

About 26 percent of the $20 billion spent each year by the system comes from the state's general fund and tuition and fees paid by students, according to a summary on the regent's Web site.