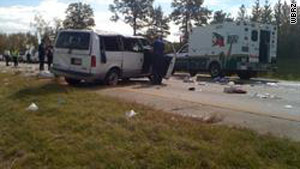 Rescue workers at the scene of a multiple-fatality crash Saturday on I-10 near Baton Rouge, Louisiana.
STORY HIGHLIGHTS

(CNN) -- Five people were killed and 10 critically injured Saturday when a minivan crashed on I-10 near Baton Rouge, Louisiana, state police said.

Fifteen people were in the minivan, said Trooper Russell Graham, and only two were wearing seat belts. Among the dead were children as young as 3 years old, he said.

"The minivan blew out a tire and the driver lost control," Graham said. The vehicle "sideswiped a box truck and then ran off the road into the left median, overturned multiple times and finally came to rest upright on the eastbound side of I-10," Graham said.

The one person in the truck was not injured.

Alcohol and drugs were not suspected factors in the crash, but blood was drawn from the driver -- one of the fatalities -- to confirm, Graham said.

The accident came soon after the Louisiana Legislature passed a law requiring riders in every seat to be buckled up.

"This is an example of why we implemented that law," Graham said. "It's very frustrating for us to come out here and see children dead," he said.