(CNN) -- Mississippi's governor declared a state of emergency Thursday for 12 counties after a severe weather system moved across the southern half of the state overnight Wednesday and Thursday. 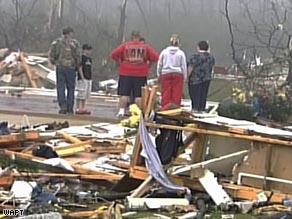 The storms, which included two tornadoes, damaged at least 108 homes.

Simpson County, about 40 miles southeast of Jackson, was hit the worst, it said.

A tornado touched down in the county about 4 a.m. Thursday, said Katherine Gunby, spokeswoman for the Emergency Management Agency.

Sixty homes were damaged and 20 people were injured in the county, the agency said. Seventeen people were treated in local hospitals and three were transported to the University of Mississippi Medical Center in Jackson, it said. Condition reports were not immediately available.

Another tornado was reported in Lauderdale County, in eastern Mississippi, where one business was destroyed and 11 homes and a business were damaged, according to the agency.

The state of emergency declared by Gov. Haley Barbour "will allow state resources to be used throughout the affected areas to assist local governments as they respond to this disaster," said Mike Womack, director of the Emergency Management Agency, in a written statement.

Damage to homes also was reported in Jasper, Jones and Lawrence counties, and power lines and trees were down in Adams, Amite, Lincoln and Madison counties, the agency said. Three injuries were reported in Jones County and one in Jasper County, it said. It gave no further details.

"The church means so much to this community," Pastor Jay Westbrooks told CNN affiliate WAPT.

The Mississippi Department of Transportation and utility companies are working to restore power to the state, Gunby said.

While the state of emergency is currently only for nine counties, it will be extended to any future counties that report damage, the Emergency Management Agency said.

All About Tornadoes • Mississippi