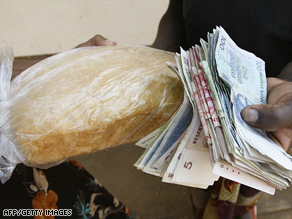 The country's acting finance minister, Patrick Chinamasa, made the announcement in a government gazette released Saturday.

Although Chinamasa did not give the date on which the $50 billion and new $20 billion notes would come into circulation, an official at the Reserve Bank of Zimbabwe said the notes would be distributed to all banks by the end of Monday.

Zimbabwe is grappling with hyperinflation now officially estimated at 231 million percent, and its currency is fast losing its value. As of Friday, one U.S. dollar was trading at around ZW$25 billion.

When the government issued a $10 billion note just three weeks ago, it bought 20 loaves of bread. That note now can purchase less than half of one loaf.

Once a regional economic model, Zimbabwe is in the throes of an economic crisis, with unemployment running at more than 80 percent and many families unable to afford a square meal. President Robert Mugabe's critics blame his policies for the economic meltdown, but he says the West is sabotaging his efforts.

In order to attract foreign currency, Zimbabwe's central bank has, since September, licensed at least 1,000 shops to sell goods in foreign currency. All mobile phone service providers are now licensed to accept foreign exchange for airtime and other services.

John Robertson, an economist in Zimbabwe, said he's puzzled by the introduction of the $50 billion and $20 billion notes.

"I am not really sure what these notes would be for," he said. "No one now accepts the local currency. It is a waste of resources to print Zimbabwe dollar notes now. Who accepts a currency that loses value by almost 100 percent daily?"

In August, the RBZ slashed ten zeros from the currency. But the zeroes have bounced back with more vigor.

But the pact has stalled over the allocation of key cabinet ministries, with Tsvangirai accusing Mugabe of grabbing all key posts such as defense, home affairs, local government, foreign affairs and finance.