(CNN) -- Pirates Thursday hijacked a German-owned tanker in the Gulf of Aden, the waterway between Africa and the Middle East which has become one of the world's most dangerous shipping lanes. 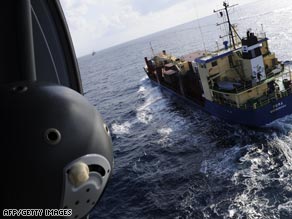 The U.S. Navy has been joined by other countries to police the Gulf of Aden.

The MV Longchamp was seized by seven pirates early in the morning, said a spokesman for the ship's owner, Bernhard Schulte Ship Management Company, of Hamburg, Germany.

The company received a phone call from the ship's captain which was "literally around three seconds.He said they'd been seized by pirates, that no one was injured, no dead ... and then clac, the phone went dead,'" said the spokesman, who did not give his name.

He said the company has heard nothing from the pirates themselves and had no information on how the vessel had been seized.

The coalition of countries patrolling the sea lanes in response to the outbreak of piracy there was not involved in the incident, said Lt. Nathan Christensen, a public affairs officer for the U.S. Navy's Fifth Fleet, which is based in the region.

He said he did not know if the coalition had received a distress call.

The Longchamp carries a a crew of 12 Filipinos and one Indonesian, Christensen said.