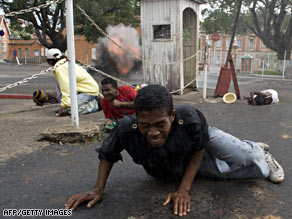 People duck to avoid gunfire Saturday in Antananarivo, the capital of Madagascar.

The official said 83 people were injured during the demonstration in the capital city of Antananarivo, according to journalist Dregoire Pourtier, who passed the information to CNN.

Brittany Martin, an American who is a Harvard Fellow and lives near the palace, said she could hear the crowd cheering amid intermittent gunshots and noises that may have been tear gas canisters. iReport.com: Are you there?

"From the window I can see military cars and ambulances driving by," Martin said. "Nothing is up in smoke. We know there have been people killed from French and Malagasy news reports.

"We can see the back of the president's palace. This morning was totally peaceful. We knew that Andry [Rajoelina] was unveiling his new government at the May 13th Plaza, which was peaceful," she said, citing a friend who was there.

Madagascar's government is in flux.

President Marc Ravalomanana fired Rajoelina as mayor of Antananarivo and put someone else in the job, but Rajoelina is still technically mayor and claims to head a transitional national government.

Martin said she heard gunshots starting about 2 p.m., after the protesters marched from the plaza to the palace. She said it was unclear where the shots were coming from.

Some media reports blamed foreign mercenaries for the shootings; others said army guards were responsible or that the army was firing at the mercenaries to protect the crowd.

Hours earlier, the government had shut down a radio station owned by Rajoelina and, weeks before, had similarly shut down Rajoelina's television station after it aired an interview with ex-President Didier Ratsiraka.

There is also anger in Madagascar -- where the World Bank says the average person earns about $320 a year -- over reports that Ravalomanana recently bought a $60 million airplane.

Last Saturday, Rajoelina took to the streets, declaring himself the nation's leader after a week of violence and looting that killed at least 80 people and wounded more than 300.

Rajoelina urged supporters to demand the resignation of Ravalomanana and said he planned to take charge until a transition government can be established in the island nation off Africa's southeastern coast.

"What we've been pushing for is dialogue the whole time," said Rodney Ford, a spokesman for the U.S. Embassy. He said he received reports that palace guards used tear gas and shot into the air to try to disperse the crowd.

"I don't think anyone wanted violence."

According to the U.S. State Department, Madagascar has about 20 million people with ethnic origins in Africa and Asia. It was administered by the British Empire during much of the 19th century until it came under the control of France, from which it gained independence in 1960.

All About Madagascar • Antananarivo • France