(CNN) -- The president of Guinea-Bissau was assassinated Monday morning, a day after an explosion killed the head of the West African country's military, the prime minister said. 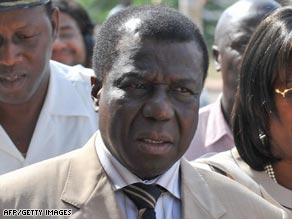 It was not immediately clear how President Joao Bernardo Vieira, 69, died. Prime Minister Carlos Gomes confirmed the death to CNN.

Army spokesman Zamora Induta said an aide to the president was killed during the gunfire.

He added that the gunmen remained at-large and that a 10-member-commission will manage the army until a new chief of staff is named.

The army, he said, will remain neutral.

Gen. Tagme Na Waie, chief of Guinea-Bissau's military, was killed in a bomb explosion in his office Sunday, according to local news reports. Five other high-ranking military officials were wounded, two of them critically.

After the attack, all local radio stations were ordered to immediately suspend their programs.

"The secretary-general strongly condemns these violent acts, which have occurred soon after successful legislative elections which paved the way for enhanced U.N. support to the country's peace-building efforts," the statement said.

"The secretary-general calls urgently for calm and restraint, and urges the national authorities of Guinea-Bissau to fully investigate these assassinations and bring to justice those responsible for them."

The British government issued a statement advising against "all but essential travel" to the country.

Guinea-Bissau, a former Portuguese colony, has a history of military coups. Monday's development is the latest violence over four months as the army and Guinea-Bissau's president have clashed.

The tiny west African country, located between Guinea and Senegal, has a population of 1.5 million and is considered one of the five poorest countries in the world, according to the CIA Factbook.

The country has been in a near-constant state of political upheaval since independence from Portugal in 1974.

In 1980, Vieira became president after a military coup. He was accused of purging political rivals and suppressing dissent, but several coup attempts throughout the 1980s and early 1990s failed to unseat him.

In 1994, the country held its first free elections, and Vieira was elected president. He held the post for five years, until a military mutiny ousted him, and the country plunged into civil war.

Successor Kumba Yala took office in 2000. He also was unseated in a military coup after three years.

Yala's ouster paved the way for Vieira to run for office again. In 2005, he was re-elected president, pledging to pursue economic development and national reconciliation.