(CNN) -- Botswana has been hailed as one of Africa's success stories and a beacon for democracy on the continent. It's home to Africa's longest continuous multi-party democracy and has remained politically stable since gaining independence in 1966. 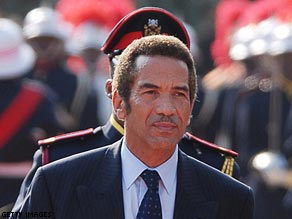 At its helm is President Ian Khama, the country's former vice president and son of Botswana's founding president.

The diamond trade and disciplined government have helped to transform Botswana from one of the world's poorest nations to a middle-income country. But there are still large problem facing the country, including the world's second high level of HIV infections, according to the World Bank, and a slowing of the countries economic growth.

The 56-year-old Khama took over office in April 2008, succeeding Festus Mogae who had been in power for 10 years, promising no radical departure from his predecessor's policies.

Khama was born in southern England and trained at the UK's Sandhurst Military Academy before returning to Botswana and later becoming the commander of the Botswana Defence Force.

He left the military in 1998 to take up the position of vice president. As the son of Botswana's most popular former president, political analysts inside the country have expected Khama to unite the factions in the ruling Botswana Democratic Party (BDP) and continue steady economic and political progress.

While Khama has only been in power for 11 months, there has been some criticism that his style is too authoritarian.

Citing Afrobarometer, an independent research group, Botswana's newspaper Sunday Standard recently wrote that there was a growing public perception that Khama has issued more directives compared to his predecessors.

One area in which he has taken a definite line is on his policy towards neighboring Zimbabwe, publicly opposing the government of President Robert Mugabe and declaring it illegitimate.

A general election is set for October 2009, with the BDP expected to win. No other political party has held power in Botswana and some commentators fear the emergence of a political dynasty that would affect Botswana's democracy.