(CNN) -- Two human-rights activists were shot and killed in Kenya's capital, Nairobi, on Thursday evening, leading a U.N. investigator to call for an independent investigation to prove that Kenyan police were not involved. 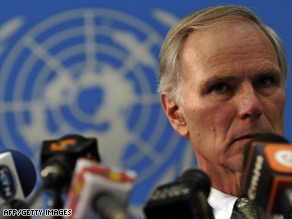 U.N. invesitgator Phillip Alston said an inquiry into the activists deaths was the only way to eliminate suspicions of police involvement.

The shootings spurred a protest by students that led police to fatally shoot a student, police said. A U.N. investigator called the killings of the human-rights workers an assassination.

"It is extremely troubling when those working to defend human rights in Kenya can be assassinated in broad daylight in the middle of Nairobi," Phillip Alston said.

"There is an especially strong onus on the Kenyan government to arrange for an independent investigation into these killings, given the circumstances surrounding them."

Alston said many are suspicious that the police were involved and an independent investigation is the only way to eliminate the suspicion.

The Kenyan National Commission on Human Rights also called for an independent probe and planned to hold a news conference Friday.

Oscar Kamau Kingara, a longtime critic of Kenyan police, was fatally shot while driving near the the state house, the home of Kenya's president. Kingara's colleague John Paul Oulu also was killed by the gunmen, who fled.

Kingara founded the Oscar Foundation, an organization that provides legal aid to the poor in Kenya. He released a report last year alleging that Kenyan police had killed or kidnapped more than 500 people in an effort to control a gang in the country called the Mungiki.

Both men also provided information to the United Nations this year that helped the organization release a scathing report about police brutality and police killings in Kenya.

The U.N. report released in late February accused Kenyan police of widespread extrajudicial killings, and called for the removal of the East African nation's police commissioner and its attorney general.

Kenyan police said in a statement Friday that investigators were looking for two suspects who were seen fleeing after the shootings of Kingara and Oulu. Police also said they would investigate three officers who shot at college students who protested after the human rights activists were killed.