(CNN) -- Pirates attacked a Japanese cargo ship off the coast of Somalia on Sunday, a Japanese Transportation Ministry official said. 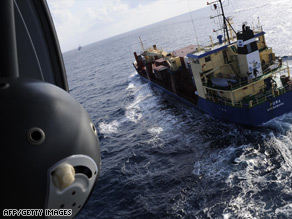 A french navy helicopter watches over a cargo vessel in the Gulf of Aden earlier this year.

A pair of small pirate vessels fired on a ship operated by Mitsui O.S.K. Lines about 4 p.m. Somali time (9 a.m. ET), damaging the front of the ship, but not seriously, according to Masami Suekado.

There were no injuries.

The exact number and makeup of the crew were not immediately known, although none of the crew members is Japanese, Suekado said.

Pirating off Somalia has increase over the past four or five years as fishermen from Somalia realize that pirating is more lucrative.

The crime, which is hard to prevent, has raised concerns internationally.

In 2008, pirates attacked nearly 100 vessels and hijacked as many as 40 off Somalia, according to the International Maritime Bureau.

In response, a number of countries have deployed ships from their navies to the region, including the United States, China and Japan.