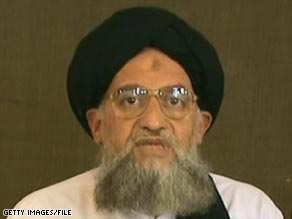 "I am not defending Omar al-Bashir or his regime, nor am I defending what it has done in Darfur and elsewhere," Ayman al-Zawahiri said in the statement released by al Qaeda's production company, as-Sahab Media.

But, he said, "the issue isn't one of Darfur and solving its problems; the issue is one of making excuses for more foreign interference in the Muslims' countries in the framework of the contemporary Zionist Crusade."

The warrant issued by the International Criminal Court earlier this month accuses al-Bashir of war crimes and crimes against humanity, charges he denies. In response, Sudan ordered 13 international aid groups to leave the country, groups that the United Nations says provide roughly half the assistance delivered in Darfur.

"The Bashir regime is reaping what it sowed," al-Zawahiri said. "For many long years, it continued to back down and backtrack in front of American Crusader pressure."

He further accused Sudan of expelling members of the mujahedeen who had sought refuge there, particularly Osama bin Laden, and declaring "in an audacious lie that they had left voluntarily, then attempting to beg payment for that from the Saudi regime and the Americans."

"The Sudanese regime continued to pant for American approval, and it agreed to the division of the Sudan, paved the way for the imminent secession of the south, provided all the information it had on the emigrants and mujahedeen to the American government, and handed over some of them to the regimes of treason and criminality in their countries," al-Zawahiri said.

"But despite all that, the senior criminals weren't satisfied with it and continued to besiege it with demands and interference, even going so far as to demand the arrest of its leaders and prominent figures."

The audio message is the fifth released this year by al-Zawahiri and the fourth in English, according to Virginia-based IntelCenter.

The center said on its Web site it focuses "on studying terrorist groups and other threat actors ... and disseminating that information in a timely manner to those who can act on it."