One million people at risk in Darfur, U.N. says

UNITED NATIONS (CNN) -- More than one million people in Darfur are at risk of losing food, water and shelter in coming months, following the expulsion of international aid groups by Sudan's government, the United Nations' chief humanitarian coordinator said Tuesday. 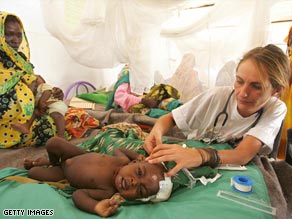 The statement by coordinator John Holmes comes after a joint U.N.-Sudanese assessment of the situation.

The information was gathered from March 11-18 in hopes of stemming further troubles in Darfur after Sudan's government expelled 13 international relief organizations from the wartorn region.

The announcement came on the same day that President Omar al-Bashir, now an indicted war criminal, ignored the threat of arrest by traveling abroad to Eritrea. Also Tuesday, a Sudanese staffer working for a Canadian relief group was shot dead in Darfur.

A full report of the assessment will be released soon, according to the U.N., but an executive summary and recommendations were made available on Tuesday.

"While a significant effort is being made by the government, by the U.N., by the NGOs [nongovernmental organizations] which are left, to plug some of the immediate gaps in these areas, these are at the same time, 'Band-Aid' solutions, not long term solutions," Holmes said.

The U.N. estimates that 1.5 million people in Darfur are dependent on healthcare support, 1.1 million need regular food aid, and another 1 million are in need of clean drinking water.

The summary released Tuesday said the World Food Programme, which is still allowed to operate in Sudan, is carrying out a one-time-only distribution program in March and April, but that new partners will be needed to continue delivering food after April.

After the International Criminal Court charged Bashir with war crimes and crimes against humanity on March 4, Khartoum expelled 13 international aid agencies and revoked the permits of three organizations in the country.

Bashir -- the first sitting head of state to be charged with war crimes by the court -- has continued to say that humanitarian efforts in the country should be "Sudanized."

"Within a year, we don't want to see any foreign aid group dealing with a Sudanese citizen," he said at a rally a week after his arrest warrant was issued.

Holmes said that 13,000 to 14,000 aid workers in the region already were Sudanese nationals.

Holmes said the cooperation and technical help from the Sudanese government on the assessment was a good step forward. But he called it "only the first of many steps if the people in Darfur are not going to suffer major consequences from these expulsions."

Sudan's U.N. Ambassador, Abdalmahmood Abdalhaleem Mohamad, has repeatedly said he has information implicating the ousted organizations in activities contrary to their humanitarian missions. He has yet to make any of that information public.

One claim is that some organizations acted as spies for the International Criminal Court.

"Despite claims that there are dossiers of evidence, we have not been given any of that evidence," he said. "In the absence of that, no meaningful investigation can be done."

The British aid organization, Oxfam, one of the agencies expelled from Sudan, released a statement in response to Tuesday's findings.

"Current stop-gap measures will only be effective for a short time," the statement said. "As the rainy season arrives within the next two months, people living in weak temporary shelters, in flood-prone locations where latrines can fill and overflow, will become at extreme risk of disease and death.

"With the humanitarian capacity reduced by nearly 50 percent, responding to such emergency scenarios will be an enormous challenge for others to tackle," Oxfam said.