WASHINGTON (CNN) -- Pirates off the eastern coast of Africa fired on U.S. sailors Saturday as they tried to reach the lifeboat where an American captain is being held, a U.S. official familiar with the situation told CNN. 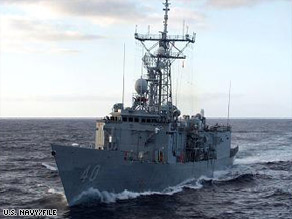 The guided missile frigate USS Halyburton, with helicopter capabilities, is now at the scene.

The gunfire forced the sailors, who did not return fire, back to the guided missile destroyer USS Bainbridge, the official said.

Capt. Richard Phillips reportedly offered himself as a hostage to the pirates during an attack Wednesday on the U.S.-flagged container ship Maersk Alabama in the Indian Ocean.

The Alabama was en route to Mombasa, Kenya, with a cargo of food aid when it was hijacked about 350 miles off the Somalia coast.

The American crew regained control of the vessel, but the Maersk company would not say how. There are about 20 crew members.

The Alabama arrived Saturday in Mombasa, along with an 18-person armed security detail on board.

The U.S. Navy -- which is in charge of the situation -- requested help from the FBI to resolve the standoff.

The FBI is launching a criminal investigation into the hijacking and hostage-taking, two law enforcement officials told CNN. The probe will be led by the FBI's New York field office, which has responsibility for looking into cases involving U.S. citizens in the African region. Agents from the office were scheduled to leave for Africa sometime this weekend, the officials said.

"If they need us to help with anything. That's kind of the way it is in these communities. ... just showing that we're concerned. We want to do whatever she needs," Walsh said. "She has a lot of family there."

Watch more about the hostage situation »

Earlier Saturday, pirates sailing a hijacked German cargo ship returned to port after failing to reach the area of the standoff with the Bainbridge, a local journalist told CNN.

The German ship Hansa Stavanger was among several pirated vessels trying to sail to the area some 300 miles off the Somali coast, a Somali journalist told CNN.

The Hansa Stavanger was hijacked April 4 off the Somali coast.

Pirates have been searching the waters off Africa's coast for the Alabama's lifeboat, a U.S. military official with knowledge of the situation said Friday. They are using hijacked vessels and skiffs launched from larger ships, the official said.

The guided missile frigate USS Halyburton, with helicopter capabilities, has joined the Bainbridge in the area. A third ship, the amphibious assault ship USS Boxer -- with a medical facility aboard -- should be there by the end of the day. iReport.com: Share your thoughts on how the pirates are being handled

Phillips is being held by four gunmen in the covered, fiberglass lifeboat. He jumped overboard at one point to try to escape, but one of the pirates jumped into the water after him and brought him back onboard the 28-foot boat.

Phillips appeared to be tied up by the pirates after the escape attempt, a Defense Department official told CNN.

For the U.S. Navy, bringing in more firepower is more than just a means to resolve a hostage situation, said Chris Lawrence, CNN's Pentagon correspondent.

Attacks in the area have picked up so drastically in recent months that the Navy has to reposition some of its fleet to deal with the threats, he said.

Meanwhile, the acts of piracy were having an effect on tourists disembarking from ships in Mombasa.

"Well, we got the international news stories on television on the ship and everybody's concerned about the route that we were on because there was always the possibility that we would be approached by pirates," one male passenger said.