By David McKenzie and Faith Karimi

NAIROBI, Kenya (CNN) -- A book detailing a culture of corruption in Kenya is making booksellers and government officials uneasy, but for different reasons. 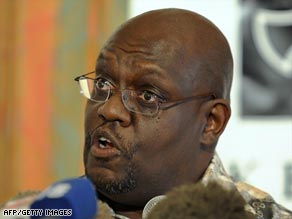 The book details John Githongo's fight to reveal the level of corruption in Kenya.

The fear of reprisals is keeping sellers from stocking it, while top officials named in the book are threatening to sue for libel.

The book, "It's Our Turn to Eat: The Story of a Kenyan Whistleblower," by Michela Wrong, focuses on John Githongo, whom the Kenyan government hired in 2003 to head an anti-graft unit. Githongo's investigations detailed an intricate web of corruption, allegedly featuring top Kenyan politicians.

Githongo, a former journalist, resigned in 2005 and fled to England. Wrong, an old friend, initially offered him shelter there.

The Kenyan government started a manhunt for him in the UK, Wrong said.

A year later, Githongo released an explosive report detailing government fraud, which led to the resignation of some Kenyan politicians linked to the scandal.

Attempts to reach Githongo through a spokesman were unsuccessful.

The fact that there is corruption in the east African nation is not surprising. Bribery is so intertwined with the Kenyan culture, there is a code word for it. When someone offers a sly smile after a service and asks for "chai," Swahili for tea, that's a cue to slap a bill on his outstretched palm.

The book's story line goes beyond corruption, however. It gives intimate details about Githongo's fight and an insider's insight on how brazen corruption is in the upper echelon. It also humanizes Githongo, who -- despite being considered a traitor by some and a fearless anti-corruption advocate by others -- had remained a mysterious figure.

The book's unavailability has not kept Kenyans from reading it.

"There's a stolen PDF [computer] file, which contains the manuscript, doing the rounds amongst the Kenyan reading groups and on mailing lists," Wrong said. "The other way that people are getting it is, they're basically buying it in Johannesburg or in Tanzania or in London ... and taking it in their luggage and then selling copies to friends."

In addition Wrong pushed her publisher, Harper Collins, to release an e-book version of the book, and Kenyans are now able to download the book legally from the Internet.

Wrong, a veteran Africa correspondent who has written books on Eritrea and the Democratic Republic of Congo, said some officials have threatened to sue her.

"They [officials] may lose more than they gain from that process," she said, adding that court testimony would offer the media a field day.

"I am not aware that people are afraid of selling the book, because we have freedom of expression here and any book can be sold," Alfred Mutua said. "A government in a free-market society does not control what people buy or sell. So if people do not want to sell books because of any litigation, that has nothing to do with us."

Booksellers have a reason to worry, because the nation's libel laws are designed to ensnare anyone involved with a product in question, according to Charles Otieno, a political analyst.

"Anything that is subject to libel, if you are found selling it, if you are found reading it or something like that, you are also actually the subject of the case," he said. "So most people are not willing to take that risk."

The reluctance of sellers to stock the book is heightened by a deep-rooted fear of the government, Otieno said,

"Nobody is willing to question government to that extent. Not many people in civil society are really as proactive as they were," he added.

For bookstore owners, the issue comes down to the possibility of lawsuits.

"There are lots of names mentioned," said Chand Bahal, a bookseller. "You can't say, 'I am going to sell this book and make it big.' ... You will be the scapegoat; you will be in trouble."