(CNN) -- Undercover officers rescued a baby gorilla from suspected animal traffickers in the Democratic Republic of Congo, a national park in the country announced Tuesday. 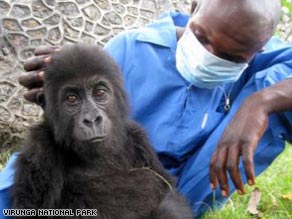 This baby gorilla was rescued from a suspected trafficker in the Democratic Republic of Congo.

The gorilla, thought to be about two years old, was hidden at the bottom of a bag and covered with clothes when Congolese Wildlife Authority officers arrested the suspected trafficker on Sunday, Virunga National Park said.

The gorilla, a female, was overheated and dehydrated after six hours in transit. She also had a puncture wound on her right leg, among other injuries, and is malnourished, but is responding to treatment, the park said in a statement.

It is not clear if the young gorilla's mother is alive or dead, park spokeswoman Samantha Newport said.

"You can assume that a gorilla family was attacked in order for the traffickers to obtain a baby -- but it is impossible to know if a whole family was wiped out, just a few individuals, or none at all," she said. "In most cases gorillas have to die to get a baby -- but we cannot know specifically for this case."

The animal is now being looked after by specially trained carers, Newport said.

"This is of course not an ideal replacement for a mother -- but the best option we have," she told CNN via e-mail. Carers often have some veterinary training, but are not fully fledged vets, she added.

But gorillas do not do well in situations like this, she warned.

"Gorillas, it is worth noting, are notoriously difficult to keep alive," she said. "Chimps are fighters, as are bonobos. But gorillas -- when the going gets tough -- tend to just shut down. So it really is a critical time right now to ensure she gets the veterinary attention and human warmth that she needs to get through this."

The suspect was getting off a plane from the interior of the country, near the gorillas' habitat, the park said.

One person has been charged under the country's law forbidding the destruction of flora and fauna, Newport told CNN. The park did not name the suspect.

Gorillas can fetch up to $20,000 on the black market, the head of Virunga National Park said.

"Investigations have yet to reveal where these animals are being sent and who is buying them, but on the ground sources tell us that a baby gorilla can fetch up to $20,000," said Emmanuel de Merode, the director. "We must remember that for each trafficked baby gorilla, several gorillas have probably been killed in the wild."

He led the three-month undercover operation that netted the suspect and the gorilla, the park said.

The gorilla is a lowland eastern gorilla (Gorilla beringei graueri), also known as the Grauer's Gorilla, a subspecies of Eastern Gorilla only found in the forests of eastern Democratic Republic of Congo, according to the park.

Virunga National Park calls itself the oldest national park in Africa, established in 1925. It lies in a region that has been badly affected by the long-running war in the Democratic Republic of Congo. The gorilla section is in a strategically important area near the borders of Rwanda and Uganda.

A ranger was killed earlier this year, and rangers lost control of a large part of the park to rebels for over a year.

But a census earlier this year suggests mountain gorillas are surviving despite poaching and war.

Officials have long said that the 250-square kilometer gorilla reserve in the southern part of Virunga National Park is where around 200 of the world's 700 mountain gorillas live.