(CNN) -- The director of a Somali radio station was shot dead and a colleague seriously injured in the capital, Mogadishu, on Sunday, according to a local journalist and a Somali journalists' organization. 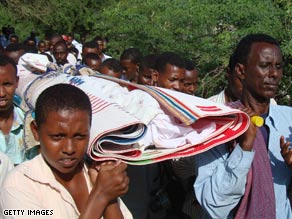 The assassination of Mukhtar Mohammad Hirabe of Shabelle Media follows last week's abduction of a station director for TV Universal.

Hirabe was shot in the head, the journalist said. His colleague Ahmed Omar Tajir was hospitalized.

Two men with pistols attacked the two men as they were talking together, said a statement from the National Union of Somali Journalists.

Hirabe, 48, director of Radio Shabelle, was shot in the head five times, and Tajir -- identified in the statement as Ahmed Omar Hashi, 47, Radio Shabelle's news editor -- was shot twice in the stomach.

Five journalists have been killed in the east African nation this year, including three from Shabelle, the group said.

The incidents have left the media community reeling in the east African nation, which has not had an effective government since 1991.

The union's statement condemned the violence, with its secretary general, Omar Faruk Osman, saying Hirabe's death was "premeditated and targeted. ... Colleagues who are committed to do their job in this extreme situation need to be protected."

Another journalist, Nur Muse Hussein, 56, died last month after being shot in April, the organization said.

CNN regularly works with Somali journalists who are employed by Shabelle Media.

All About Somalia • Committee to Protect Journalists