(CNN) -- Oil company Royal Dutch Shell will pay $15.5 million to settle a lawsuit against its Nigerian subsidiary by the family of executed Nigerian environmental activist Ken Saro-Wiwa and other dissidents, the plaintiffs announced Monday. 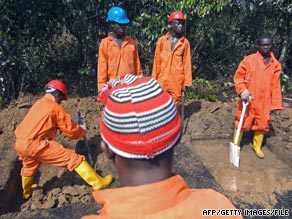 A team from Royal Dutch Shell works amid spilled oil in Atali, Nigeria.

The lawsuit accuses Shell of complicity in the 1995 hanging of Saro-Wiwa and the killings or persecution of other environmental activists by the military government that ruled the country at the time. Roughly half of the settlement will go into a trust fund to help the people of Nigeria's Ogoni region, according to court papers.

"In reaching this settlement, we were very much aware that we are not the only Ogonis who have suffered in our struggle with Shell, which is why we insisted on creating the Kiisi Trust," Saro-Wiwa's son, Ken Saro-Wiwa Jr., said in a statement accompanying the settlement.

Nigeria's Ogoni people have complained for years that Shell was allowed to pollute its land without consequences. Saro-Wiwa's death sparked a worldwide outcry, and his movement ultimately forced Shell out of the oil- and gas-rich Ogoniland region.

There was no immediate response from Shell to Monday's settlement.

The New York-based Center for Constitutional Rights went to court on behalf of Saro-Wiwa's family and others in 1996. Shell fought the lawsuit until last week, when a federal appellate court ruled that the plaintiffs could sue the company's Nigerian subsidiary in American courts, overturning a March decision in the company's favor.