(CNN) -- Poet, dramatist and novelist, Wole Soyinka's work has left a large imprint on the literary landscape of Africa. 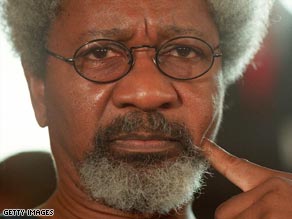 His work has been performed internationally and in 1986 was awarded the Nobel Prize for Literature. Regardless of the global profile and recognition, writing for Soyinka has always been, and always will be, a part of his life.

"I began writing early, very, very early. ... I was already writing short stories for the radio, and selling poems to poetry and art festivals, I was involved in school plays, I wrote essays, so there was no definite moment when I said, now I'm a writer. I've always been a writer," he told CNN.

Before being honored with a Nobel Prize, Soyinka had written plays performed across the world, set up drama groups and held academic positions in the UK, the U.S. and Nigeria. Poetry and novels make up the rest of his work, but it is with the medium of drama that he feels most comfortable.

"When I write plays, I'm already seeing the shapes on stage, of the actors and their interaction, and so on and so forth. I don't think I've ever written one play as an abstract piece, as a literary piece, floating in the air somewhere, to be flushed out later on," he said.

Now 75, Soyinka claims it is a natural curiosity with life and humanity that has always compelled him to write, and should be a pre-requisite for all aspiring writers.

"Before you're a writer, you're a citizen, a human being, and therefore the weapons of the citizen are at your disposal to use, or not use," he said.

Often he's used those "weapons" to take aim at oppression, corruption, the legacy of colonialism and slavery, both in his work and more overtly in his political activism. At times he's suffered for his outspoken views; in 1967 he was imprisoned for 22 months for publicly calling for a truce during Nigeria's civil war and in 1994 was forced to leave the country when General Sani Abacha came to power.

"One of my earliest short stories in fact had to do with the story of a family which escaped enslavement by Portuguese slave leaders, so you can see how early I was preoccupied by that theme of power and freedom, and domination," he said.

"If there's one overriding political theme it's my continuing emphasis on the axis of freedom and power. I think that the history of the world, of all societies, has spun on those two axes."

Soyinka spends his time between Nigeria, Europe and the U.S., much of it on the lecture circuit, but the need to write remains.

"I've always written plays for the purpose of getting something out of my system. That's the first stage. And the next stage is, I want to get it onto the platform -- onto the stage. And once I've done that, no matter where, I'm satisfied."