(CNN) -- What can 40 goats and 20 cows buy a Kenyan man? Chelsea Clinton's love, if you ask Godwin Kipkemoi Chepkurgor. 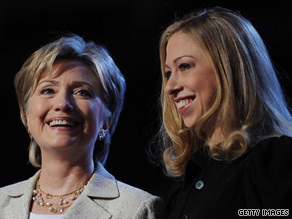 The Kenyan man first offered the dowry nine years ago to then-President Bill Clinton in asking for the hand of his only child. He renewed it Thursday after Secretary of State Hillary Clinton was asked about the proposal at a Nairobi town hall session.

CNN's Fareed Zakaria, the session's moderator, commented that given the economic crisis at hand, Chepkurgor's dowry was "not a bad offer."

However, Clinton said her daughter was her own person.

"She's very independent," she said. "So I will convey this very kind offer."

The audience laughed, but Clinton's comments were no joke to Chepkurgor, who described the younger Clinton as a "beautiful, disciplined and well-natured woman."

"Of course I have never met her, but I like her family and how they stick together," Chepkurgor told CNN. "I've waited for a long time. I'm still waiting to meet her and express my love for her."

Chepkurgor operates a small electronics and computer shop in Nakuru, a major city northwest of Nairobi. He may still be waiting for Chelsea, but he's not exactly single. He married his wife Grace, a college classmate, in 2006.

"My wife has no problem with this," he insisted. "She listened to the answers given by Hillary and did not complain."

Polygamy is legal in Kenya, so Chelsea would be Chepkurgor's second wife.

"Is that allowed in your side of the world?" he laughed.

In Kenya, a man proposes with dowry for the prospective bride, Chepkurgor explained. He said he stands by his initial livestock offer until someone makes a counteroffer.

Chepkurgor, now 39, first made his intentions known when all three Clintons visited East Africa in 2000. He wrote a letter to the former president, offering himself as his only child's suitor. He said he had not expected the secretary of state to address the issue during her visit to Kenya this week.

However, he admits his chances might be rather slim.

"Unfortunately, I don't have their contact information," he said.

"I just want to convey my message of goodwill to the Clintons," he said. "And to all of America."

All About Chelsea Clinton • Hillary Clinton