(CNN) -- The young man's call echoed throughout the remote village in northern Nigeria -- the marriage ceremony was about to begin. 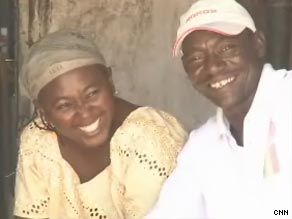 Umar Ahmed and his wife wait for anti-HIV drugs at a hospital in Nigeria.

Under the dusty sun, the fathers of the bride and groom agreed to the marriage and this ancient Muslim tradition proceeded as it has for hundreds of years.

But unknown to the gathered villagers, the couple is hiding a modern secret.

Both bride and groom are HIV-positive and marrying with the support of a local government program that encourages such "HIV-marriages" in the hope of preventing the virus from spreading.

After the ceremony and away from the village, the husband agreed to speak with CNN as long as he was not identified.

"The woman I marry loves me -- I love her," he said. "And we promised that we can keep ourselves healthy and clean."

According to the United Nations, Nigeria has the third-largest HIV population in the world, with about 3.1 percent of its 148 million people infected.

Officials working for the Bauchi State Agency for the Control of AIDS, Tuberculosis and Malaria, known as BACATMA, hope to put a dent in those numbers -- not just by treating HIV-positive people with free antiretroviral drugs but, they say, by helping more than 100 HIV-positive couples marry.

The agency offers to pay for the dowry, provide counseling and even employment within the agency. BACATMA officials hope that, by keeping HIV-positive couples together, they will keep AIDS from spreading to anyone not infected.

"If someone having HIV marries another HIV-AIDS person, that means there will be no HIV transmission to another negative person," said Rilwanu Mohammed, the BACATMA chairman.

However, UNAIDS, the UN agency tackling HIV and AIDS, has its doubts, arguing such marriages do not prevent the spread of AIDS.

"There are better methods to address the prevention of HIV and AIDS rather than encouraging that kind of union," said Warren Naamara, the UNAIDS Nigeria coordinator.

"We have made it very clear from UNAIDS that the best way to address HIV infection is universal access to prevention, treatment and care."

There is no evidence that such marriages stop the spread of AIDS. However, for many of the couples, the marriages support their personal fight against AIDS and the stigmatization it often brings from society, friends and family.

That stigmatization can lead HIV-positive people to become outcasts, discriminated against and sometimes physically abused.

Queuing for their antiretroviral drugs at a local hospital, Umar Ahmed and his wife said they married last year and have since had a child.

"Before, I was lonely," Umar said. "Being with my wife, I feel great -- because we stay together, we discuss different issues together."

For those couples who decide to have children, BACATMA tries to reduce the odds that the child will be born infected with HIV by ensuring that the parents have antiretroviral agents and medical advice.

Still, the decision to have a child is a controversial one when the parents who decide to do so are sick and unlikely to be able to raise the child.

All About HIV and AIDS • Nigeria • United Nations