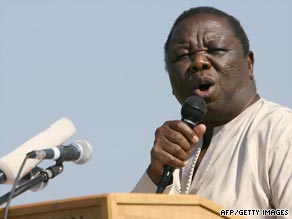 Prime minister Morgan Tsvangirai pictured at an MDC rally in Bulawayo on September 13.

No official events were organized by either Mugabe's Zanu PF party or Tsvangirai's Movement for Democratic Change, on Tuesday, the anniversary of the deal. Instead both parties take issue with each other on the governance of the country.

For many Zimbabweans the situation during the past year has shown limited improvement, as international isolation continues to hit the economy, corruption is rife and food shortages continue.

An outbreak of cholera due to unsanitary conditions and crumbling infrastructure has also left more than 4,000 people dead since last year.

According to the United Nations one in every 14 Zimbabweans is malnourished. In the southwest, residents told CNN -- which was banned from Zimbabwe for much of the past decade but has now been officially allowed back into the country -- how they struggle on one meal of maize.

Ntombana Ngwenya, 72, is caring for six grandchildren whose parents she says are in South Africa struggling to find work.

Ngwenya says she only has enough food to last for the rest of the month and has to beg for food from neighbors "just to get a little bit of maize to make one bun for the children and give each one a little piece, or beg for some vegetables to give the children and then we go to sleep. That is how we survive."

The power-sharing deal followed a presidential vote in March 2008, from which Mugabe, the incumbent president -- and ruler of Zimbabwe since independence from the UK in 1980 -- failed to draw enough votes to retake office.

But Tsvangirai withdrew from the presidential run-off vote scheduled for June 2008, alleging Mugabe supporters had used violence and intimidation against their opponents. Scores of opposition party supporters were beaten, tortured and killed.

A power-sharing agreement was eventually signed in September last year, but a government of national unity was only formed in February 2009, after Tsvangirai was sworn in as prime minister.

During a recent interview with CNN Tsvangirai expressed dissatisfaction with the implementation of the agreement. Now CNN understands that his party members are considering pulling out. "We are going to have to assess our options," Tsvangirai said. "We have a constituency and they expect nothing less than to see Zimbabwe progress on a democratic path."

In the capital Harare, food shelves which were empty last year have been filled again, while overall production has increased from about 5 percent in February to between 20 and 30 percent now. Hyperinflation is no longer at its peak of 200 million percent, when bank customers found the value of withdrawn savings was less on leaving the bank than when they entered.

But many Zimbabweans do not have access to foreign money. In towns like Umguza principal Nkululeko Ndlovu explains how some parents pay school fees in livestock because they do not have foreign currency -- even though he has reduced fees from $24 to $8 dollars a year.

MDC lawmakers continue to be harassed and arrested. The party's candidate for deputy agriculture minister, Roy Bennett, a longtime opponent of the Zanu PF party, has yet to be sworn in and instead faces charges of sabotage.

Mugabe has argued that Bennett cannot be sworn in until he is cleared of the allegations.

Meanwhile the MDC has rejected the reappointments of the governor of the reserve bank and the attorney general. It claims Zanu PF has used the roles to abuse Zimbabwe's finances and prosecute political enemies.

Zanu PF counters that the appointments were made before Tsvangirai became prime minister -- despite the power-sharing deal stating that Mugabe needed to consult Tsvangirai.

Mugabe's minister of state for presidential affairs Dydimus Mutasa told CNN: "Mr. Tsvangirai's concern is no concern at all because these people were appointed before Mr. Tsvangirai was appointed and how could our president consult a person who was not there."

Many fear that the MDC might quit the unity government, creating a leadership vacuum that can only be filled by a coup or an election. But Zimbabweans are too traumatized to face another vote and are still struggling to draw up a new constitution.

Hope is what has helped many Zimbabweans survive the brutality of their country's politics so far -- and it is hope that they continue to hold on to as they stare at an uncertain, and often scary, future.