(CNN) -- A radical Islamist leader in Somalia said Sunday that a suicide attack that killed 21 African Union peacekeepers was the right thing to do. 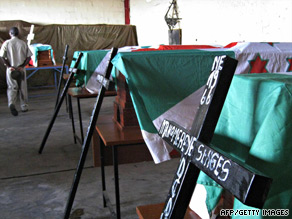 A relative walks past caskets containing the bodies of Burundian soldiers.

"The Islamic religion permits such kinds of attacks if they are against known enemies and in the defense of the religion, but there are people who distort that explanation," Aweys said, addressing hundreds of people during a religious sermon at Elashabiyaha, a suburb of Mogadishu.

Suicide bombers, disguised in two U.N.-marked vehicles, rammed through the security gate of the mission's headquarters, which is attached to Mogadishu's airport.

Analysts hailed the death of Saleh Ali Saleh Nabhan as a major blow to al Qaeda's efforts to work with Al-Shabaab to try to gain a foothold in the lawless country.

"The U.S. government is responsible for all problems on the Muslim nation particularly on the Somalis," he said. Aweys heads the Hizbul Islam (Party of Islam) armed group which is allied with Al-Shabaab and opposes the presence of Ethiopian forces in Somalia.