LONDON, England (CNN) -- A giant oil-trading company is offering to pay thousands of Africans a settlement after a contractor illegally dumped toxic waste in West Africa three years ago. 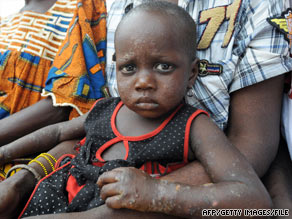 Parents say their child's body is covered in lesions as a result of toxic waste dumped in Ivory Coast in 2006.

The United Nations says the 2006 dumping in Ivory Coast killed 15 people and sickened about 100,000 others.

Trafigura is offering $1,536 (or 950 British pounds) per person to settle a lawsuit stemming from the dumping of 500 tons of toxic waste off Ivory Coast, or Cote d'Ivoire, a company spokeswoman said Monday.

The law firm representing the claimants has said in the past it represents up to 30,000 people, making the settlement potentially worth about $46 million.

A judge still must approve the deal before it becomes final. The Trafigura spokeswoman, Alex Nelless of the public relations firm Bell Pottinger, said she did not know if a court date had been set.

The Dutch-based company does not admit liability in the settlement and aggressively fought the suit.

It threatened to sue media outlets, including the BBC, for its reporting of the case.

The British law firm representing the victims Monday refused to comment on any aspect of the case or to confirm the existence of a settlement.

Nisha Patel, a spokeswoman for Leigh Day and Co. in London, said she did not know when the firm would be able to comment.

Trafigura also sued Leigh Day for libel, a suit that Trafigura said had been "resolved."

"According to official estimates, 15 people died, 69 people were hospitalized and over 100,000 others, complaining of nausea and vomiting after inhaling fumes, sought medical treatment after the incident," said the report released Wednesday by Okechukwu Ibeanu, an unpaid investigator for the Geneva, Switzerland-based U.N. Human Rights Council.

The areas where the toxic waste was dumped still have not been decontaminated and continue to threaten residents' health, Ibeanu said last month. Many people, he said, report headaches, skin lesions, digestive difficulties and nose, throat and lung problems, according to a U.N. statement.

Trafigura rejects the U.N. findings and said the investigator ignored repeated offers to see the results of the company's own studies. It said 20 experts it had hired did not find a link between "exposure to the chemicals released from the slops [toxic waste] and deaths, miscarriages, stillbirths, birth defects, loss of visual acuity or other serious and chronic injuries."

It admits that a contractor dumped the toxic waste but denies responsibility.

"It remains Trafigura's position that it did not foresee, and could not have foreseen, the reprehensible acts of Compagnie Tommy in dumping the slops in and around Abidjan in August and September 2006, and that Compagnie Tommy acted entirely independently of, and without any authority from, Trafigura," the company said in a statement Saturday.

"Nevertheless, Trafigura regrets that this incident occurred and is pleased that the matter has now been resolved," it said.

Trafigura said the statement was being issued jointly with Leigh Day and that a court had ordered the law firm to publish the statement on its Web site.

CNN could not find the statement on Leigh Day's site, and the firm's spokeswoman declined to say if it was there.

"While we certainly do not accept legal liability, Trafigura regrets the Probo Koala incident and in particular the distress that it caused the local population," company director Eric de Turckheim said in a statement.

Trafigura says on its Web site that it has "access to approximately $17 billion in credit facilities and investments ... around the world of more than $1 billion."