(CNN) -- Pirates seized control of a cargo vessel near the Seychelles Thursday, one of two attacks that took place within minutes of each other off the coast of east Africa, according to the European Union Naval Force. 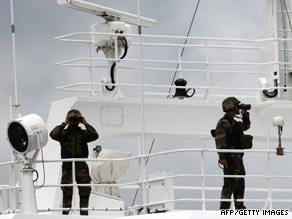 The International Maritime Bureau say attacks off the east coast of Africa have increased this year.

The EU maritime patrol responded to the early morning attacks, along with the Seychelles Coast Guard.

The crew of the Panama-flagged MV Al Khaliq said two pirates had boarded the vessel before communication was cut off with the crew.

The EU force confirmed that six pirates have boarded the 180-meter long bulk carrier, with two attack skiffs in tow. They hoisted the "mother skiff" onto the vessel with a crane, the EU force said.

A Belgium warship, part of the EU force, responded to the attack, which caused no casualties. The 200-meter MV Jolly Rosso continued its voyage.

Pirate attacks off the coast of east Africa have significantly increased this year, according to the International Maritime Bureau, which monitors shipping crimes. But successful attacks have gone down as a result of a strong presence of international monitors.

The first nine months of this year has seen more pirate attacks than all of last year, the bureau reported on Wednesday. From January 1 until September 30, pirates worldwide mounted 306 attacks, compared with 293 in all of 2008, it said.

More than half of this year's attacks were carried out by suspected Somali pirates off the east coast of Somalia and in the Gulf of Aden, a major shipping route between Yemen and Somalia.

Out of those attacks, Somali pirates successfully hijacked 32 vessels and took 533 hostages. Eight others were wounded, four more killed and one is missing, the bureau said.

On Monday, pirates hijacked a Chinese merchant ship and its 25-member crew about 630 miles (1,000 km) northeast of Seychelles. The pirates appeared to be heading toward Somalia, the European Union Naval Force said. China plans to make "every effort to rescue" the crew members, Foreign Ministry spokesman Ma Zhaoxu, told reporters.

The bulk carrier De Xin Hai is one of four ships that Somali pirates are holding for ransom with 80 crew members as hostages, the International Maritime Bureau said Wednesday.

Maritime authorities say two recent trends have led to a rise in piracy: access and opportunity.

As global commerce picks up, more and more of the world's fuels, minerals and other crucial commodities travel by ship. Ninety-five percent of America's foreign trade, for instance, moves by water, according to the U.S. Maritime Administration.

That cargo is an easy target for robbers in countries that lack the resources to secure their shorelines, such as Somalia.

Somalia's transitional government, which has a tenuous grip on power, has been unable to stop the pirates -- many of whom are based in the country's port cities.

This has prompted Europe and other Western countries to step up maritime patrols.

"In the Gulf of Aden, the number of attacks have gone up. But because of the presence of naval vessels, the success rate of the pirates have decreased," said Cyrus Mody, manager of the International Maritime Bureau. "The navies are responding very very effectively."

Piracy accelerated after the fall of the Somali government in the early 1990s and began to flourish after shipping companies started paying ransoms.

Those payments started out being in the tens of thousands of dollars and have since climbed into the millions.

With the ransoms they collect, pirates can earn up to $40,000 a year, analysts say. That's a fortune for someone from an impoverished country.

Some analysts say companies are simply making the problem worse by paying the piracies.

"Yes, the ransoms have probably caused the piracy to become a bit more rampant. But at the same time, from the owner's point of view, there is no other way currently to secure the safe release of the vessel along with the crew and the cargo," Mody said.

"It's basically a cycle."

All About Pirates • Seychelles