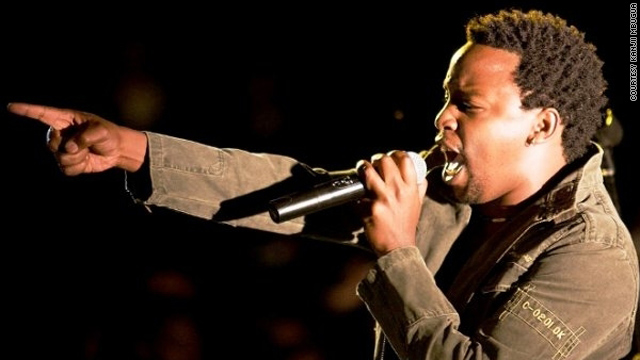 (CNN) -- Kanjii Mbugua storms the stage amid cheers as fans crane their necks to see the Kenyan musician.

His twisted hair and baggy T-shirt are a far cry from his formally dressed fans. He belts out "I'm Just a Man," one of his trademark songs, and dashes across the stage.

But the 31-year-old Nairobi, Kenya, resident is not a hip-hop or rock artist. And don't call his music rap, either.

"I'm a socially conscious musician with a strong gospel background," Mbugua said. "I want to use my music to communicate with our youth about their great potential ... of being the solution to Africa's problems."

Mbugua is among a generation of young Kenyans who are borrowing a page from groups like U2 and using their songs to address social issues, a clear indication that a fear of authority is waning.

After years of feeling shortchanged by political leaders, some Kenyans are using music to call out politicians in the mostly conservative nation. Their message -- in a mixture of English and native languages -- is popular with locals.

In "Mteja," a popular collaborative song by seven Kenyan musicians, a list of government failures scrolls across the video.

"Only 17 percent of Kenyans have access to drinking water," a message reads. In the background, the group croons about corruption, bad infrastructure and lack of accountability by politicians.

Kenyan musician Eric Wainana became a household name after he released the song "Nchi ya Kitu Kidogo," which translates from Swahili as "Land of Petty Bribery." The song, which became an unofficial anthem, left government officials uncomfortable. State-run broadcasters did not play it for years.

But the music is not limited to politics. It reaches out to youth with messages such as "wrap it up" -- use condoms -- to fight teen pregnancies and diseases such as AIDS, a scourge on the continent.

About 22 million people are living with HIV in Africa, two-thirds of the world's afflicted, according to the United Nations. Two million people died of AIDS two years ago, and three-quarters of the deaths were in Africa.

"Music stars ... can help fast-track awareness about HIV into the hearts and minds of African youth," Michel Sidibe, director at UNAIDS, said to mark the MTV Africa awards this month. Sidibe called African musicians role models for young people and "protagonists in the fight against the pandemic."

The concept of using music and media outlets to fight AIDS and social injustices is not entirely new.

Watch how music and politics mix for Nigeria's Femi Kuti

In 1998, UNAIDS teamed up with MTV to launch Staying Alive, one of the largest HIV awareness programs aimed at youths.

But the campaign, which used films and Web content, did not reach its intended audience in Africa, where most people do not own a television set and have no access to the Internet.

"We have about 800 to 1,000 people every time we perform," said Mbugua, who recently toured high schools and universities as part of Music With a Positive Influence or MWAPI, a collaborative effort among various musicians in Kenya.

As the African music scene has become more vibrant in the past 10 years, so has the influence of the artists. But they are not without their critics, who say the flamboyant lifestyles of the musicians are not in tune with their message.

"They are always in newspapers chasing women and dressed like gangsters," said Jane Kamau, 23, a college student. "Why should I listen to them and consider them role models?"

Ugandan singer Daniel Kigozi, who uses the stage name Navio, said judging his counterparts based on outer appearances is wrong.

"The dressing is just a representation. ... What people admire is the struggle, where they come from," he said. "They know their audience, they know their story because they have lived it, nearly all of us have been affected by bad governments or indirectly by HIV."

Kigozi, 25, said African singers can connect with the youth in a way the older generation never will.

"They have the lingo, they can address the issues in a straightforward way through music," he said. "Some of the youth just need something to look up to, someone to listen to, someone they can connect with."