ICC prosecutor: Suspects in Kenya violence will be tried 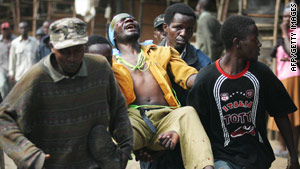 Clashes after the disputed election of 2007 left more than 1,000 dead and hundreds of thousands homeless.
STORY HIGHLIGHTS
RELATED TOPICS

Nairobi, Kenya (CNN) -- The International Criminal Court chief prosecutor on Thursday told Kenya's leaders that he will proceed with trials against suspected perpetrators of postelection violence that left more than 1,000 dead.

"I explained to them that I consider that the crimes committed in Kenya were crimes against humanity," Luis Moreno-Ocampo said after meeting with President Mwai Kibaki and Prime Minister Raila Odinga.

"I consider that the gravity is there and therefore I will proceed ... I hope that the investigations of the International Criminal Court, if the judges decide to do it, will help Kenya overcome its problems."

The fighting, which flared after the December 2007 elections, displaced hundreds of thousands of Kenyans. It started after the main opposition candidate disputed the results, sparking some of the worst violence in the nation's history. The botched election and its aftermath also tainted the country's image as an island of stability in the region.

Kibaki and Odinga are the leaders of the shaky coalition government formed in the wake of the violence. They issued a joint statement following their "candid and frank" discussions with the chief prosecutor on Thursday:

"The government remains fully committed to discharge its primary responsibility in accordance with the Rome Statute to establish a local judicial mechanism to deal with the perpetrators of the postelection violence," the joint statement said. "In addition, the government remains committed to cooperate with ICC within the framework of the Rome Statute and the International Crimes Act."

The coalition government missed its own September deadline for setting up a tribunal to try suspects involved in orchestrating the postelection chaos. After the government missed the deadline, the International Criminal Court said it would step in to address impunity in the country.

"Kenya will be a world example on managing violence," Moreno-Ocampo said.

The issue of prosecuting postelection culprits has sparked publicized wrangling among members of the coalition government. Analysts say the administration has been reluctant to pursue the prosecutions because the chief suspects are senior government officials.

Former U.N. chief Kofi Annan, who negotiated the deal that led to the coalition government, has repeatedly warned that the International Criminal Court would intervene if a tribunal to try the suspects was not established.

Annan handed a list of suspects to the ICC in July, a sign that he was losing patience with the delay in the formation of a tribunal.

In a visit to the east African nation last month, Annan said that proceedings against culprits need to occur before campaigning starts in Kenya's next election in 2012.