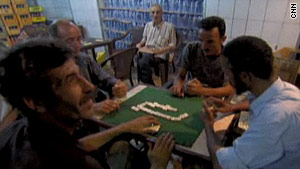 Tripoli has grown concerned about the number of Libyans traveling across to Algeria to join al Qaeda.
STORY HIGHLIGHTS

(CNN) -- In what may prove one of the biggest breakthroughs against Islamist terrorism since 9/11, the Libyan Islamic Fighting Group (LIFG), a militant Libyan Jihadist group, once allied with Osama bin Laden and with close personal ties to al Qaeda's senior leadership, is publicly repudiating al Qaeda's ideology.

Many expect the breakthrough talks to have an impact far beyond Libya.

The LIFG's disavowal of the use of violence to achieve political ends, its criticism of attacks in the West and its clear-cut ruling that the killing of civilians is never legitimate from an Islamic point of view, amount to a stunning rebuke of Bin Laden's brand of Jihad, from former allies with significant credibility amongst Jihadists worldwide.

The respect with which the LIFG is held in Jihadist circles will likely hurt al Qaeda's recruiting efforts in Libya and further afield. "If someone from the government starts talking [about] how bad is that terrorist activities it will not be received in the same way as when it comes from the leaders of the terrorist group because [they] have more credibility," Saif al Islam Gadhafi told CNN.

Gadhafi was in no doubt about the significance of the breakthrough: "It's big news. It's a big thing ... especially in the Middle East and North Africa for sure."

Noman Benotman, a key intermediary in the talks, told CNN that the LIFG's revisions will be "a very big shock" to al Qaeda.

Libyan officials hope that the revisions document will have an impact in Algeria in particular. In the last two years Libyan security services have grown increasingly concerned about the rising number of attacks launched across the region by al Qaeda in the Islamic Maghreb (AQIM), al Qaeda's North African affiliate.

They have also grown concerned about the number of Libyans traveling across to Algeria to join the group. Over the last months LIFG revisions have been serialized in leading newspapers in Algeria and disseminated by the government to militants across the country. Libyan sources told CNN that, while it is still early days, the document may already have made an impact in Algeria because since the revisions were published attacks are down.

"We have to prevent those people from killing Muslims and Arabs and innocent people in Libya and Algeria and the best thing is that to let those people who led the terrorist activities in the past to show up and speak and talk about their experience and this is the best weapon against terrorism in our world," Gadhafi told CNN.

The impact these revisions will have will likely depend on how they are viewed among the radical-leaning Muslims al Qaeda is targeting for recruitment. Several hard-line Jihadist critics have stated that the LIFG only wrote the revisions because it was coerced to do so by the Libyan security services inside prison.

It's a big thing ... especially in the Middle East and North Africa for sure
--Saif Gadhafi

But the LIFG's leaders insist the document is genuine. So too does Gadhafi: "We don't dictate anything on them and we are not telling them you have to write this or say this no, no, no. Not at all otherwise it would be a fake game, like everything was authentic it should be real and sincere otherwise it will be just a game. Nobody can impose anything on them," he told CNN.

When we spent time inside Abu Salim prison in early September we were told by several mid-ranking members of the LIFG that the revisions were genuine.

They told us that that being in prison meant that they could not speak completely freely, but that the revisions were the result of a genuine rethink by the group. "Iraq had a big influence on us," one of them told us, referring to al Qaeda in Iraq's increasingly barbaric campaign of violence there.

The LIFG's rethink has been strengthened by the fact that their document has been endorsed by a half dozen leading Islamic clerics from around the Middle East, including Yusuf al Qaradawi, a highly influential Egyptian cleric based in Qatar who threw his weight behind the Libyan reconciliation process in a live-televised Friday sermon last month.

The revisions may resonate all the more because they are just the latest critique of al Qaeda from within the Jihadist movement.

In September 2007, for example, Salman al Oudah, a cleric once greatly admired by Bin Laden, personally criticized al Qaeda's leader in a televised address. In the late summer Al Oudah endorsed the LIFG's revisions in a statement on his Web site.

Tarek Durman, a mid-level LIFG commander arrested in Jordan in 2000, told us inside Abu Salim prison, that the revisions "may have an impact on al Qaeda's new recruits by virtue of the support of the Sheikhs [and the fact that it is] the product of a well known group with wide experience ... these people will influence many groups and individuals. I even expect they may have an impact on al Qaeda."

Other LIFG prisoners were more sanguine. "It will have more of an effect on mature Jihadists than young ones," Lotfi Kreir told CNN.

Benotman, a key broker in the talks, accepts that some young extremists will totally close their ears to the LIFG's Revisions. "Sure, some say that this message is coming from old-timers who are not fighting any more. Sure they use emotional blackmail and say we are dying for you and you say this? But what I'm trying to do is to start to make the young think."

Al Qaeda has thus far not officially commented on the LIFG revisions. According to Benotman, Zawahiri, is maintaining a strategic silence, not wanting to draw more attention to the document. As late as this August Zawahiri heaped praise on LIFG leaders in an online video statement in an apparent attempt to make them think twice about publicly criticizing al Qaeda. That earlier praise may make it all the more difficult for al Qaeda's number two to now attack the revisions.

For al Qaeda the revisions have a sting in the tail because several of its top leaders operating out of the Afghan-Pakistan border region are former members of the LIFG. For Abu Yayha al Libi, currently al Qaeda's chief propagandist, the rebuke from the LIFG was personal.

One of the LIFG Shura Council members who authored the revisions in Abu Salim prison is none other than Abu Yayha's [elder] brother Abd al Wahab al Qaid. Tarek Durman, the mid-level LIFG commander told CNN that he expected Abu Yayha to "not react to this event," something which may weaken al Qaeda's ability to counter the LIFG's arguments.

Gadhafi believes that the process he initiated in 2007 should be a model for other countries in the struggle against Islamist violent extremism. "Even for Americans it is important to engage with al Qaeda, the Taliban.

"Dialogue is more important and more efficient than smart bombs and UEV and bullets. Dialogue is very important because you can kill a 100 or 1000 terrorists but next month next year they will be replaced by others. The most important thing is ... how to kill the source of the terror the ideology, the wrong perception, the wrong ideas, the wrong principles."

Gadhafi added: "We have to prevent those people from killing Muslims and Arabs and innocent people ... and the best thing is to let those people who led the terrorist activities in the past to talk about their experience. This is the best weapon against terrorism in our world."